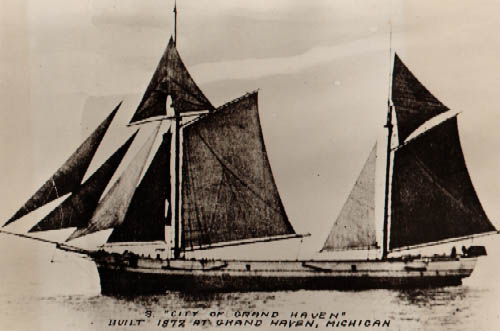 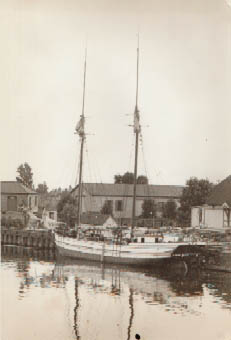 The City Of Grand Haven was in active service on Lake Michigan in the lumber trade for over fifty years. She was originally built as a two masted schooner barge designed to be towed by a steam powered tug although she would occasionally sail under her own power. The City Of Grand Haven often carried over 250,000 board feet of lumber between Michigan ports and Chicago,Illinois, two thirds of which would be carried below deck and the rest above.

April, 1884. The City Of Grand Haven underwent a change in her rigging. She changed from a unrigged barge with two short masts widely spaced to a distinctive "Grand Haven Rig" by adding topmasts and a jibboom. The vessel was now more independent of a steam tug, but she continued to haul lumber between the Michigan ports and Chicago. By the 1890's the City Of Grand Haven and three of her sister vessels had been operating with this type of rig for ten years proving the utility of this type of rigging and resulting in additional owners adopting it. Labor costs along with maintenance costs were significantly reduced.

During the career of the City Of Grand Haven the Life Saving crews were needed to render assistance on numerous occasions, some quite serious. During her last year in service, 1925 when she was 53 tears old, she had many "temporary" repairs and she had difficulty retaining a crew. Much of the time was spent just keeping her afloat. Daylight could be seen through the seams above the waterline and water leaking in below.
Final Voyage

In 1925 the City Of Grand Haven after making her final trip, lay dormant at a dock in Holland, Michigan until she was towed to Milwaukee. She remained at a dock there until late in 1927 when she was sailed to Marinette, Wisconsin in hopes of using her in the filming of a movie which never happened.

In 1932, the vessel was stripped where she was moored (in Marinette) in a slip near the foot of 6th Street and left to decay. She was officially abandoned by her owners on December 14,1937, and gradually settled into the mud at the bottom of the slip while scavengers stripped her of her remaining equipment and youths amused themselves by playing on her remains.
Today

In 2012 and 2013 at the site where the City Of Gran Haven was finally abandoned in 1937, a sediment removal project took place. During the dredging of the 6th Street Slip area the shipwreck City Of Grand Haven was partially removed to allow for the removal of sediment. "The shipwreck debris was handled differently than other debris encountered because of the high content of metal fasteners and bindings it contained. The shipwreck debris was too large for the rock crusher and contained too much metal to be safely shredder in the tub grinder; therefore, the shipwreck debris was wipe sampled, found to be nonhazardous, and shipped to the landfill without treatment." Construction Completion Report of The Menominee River Sediment Project.

The site where the wreck now lies is a wet, muddy area with parts of the wreck exposed. Thirty years ago it was underwater. Parts of the sides are visible along with the center board trunk. The bow is covered by weeds and brush and the stern is not visible.