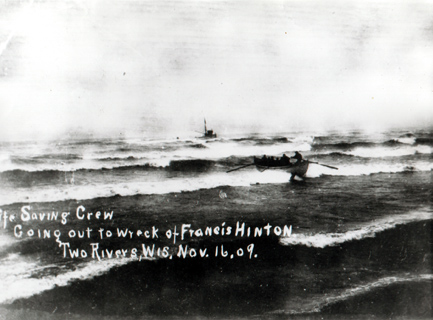 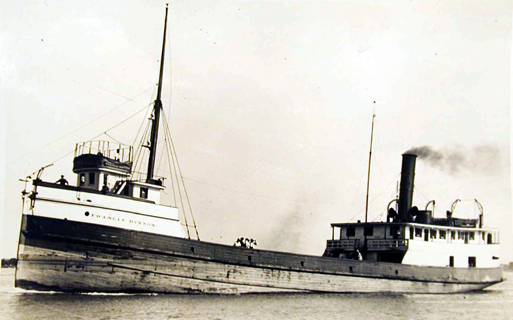 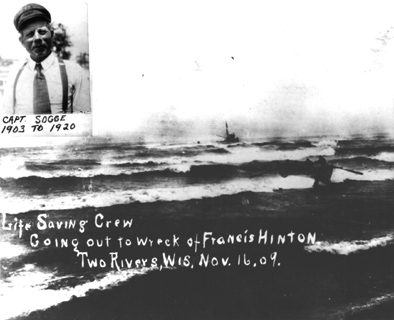 The wooden hull, steambarge Francis Hinton,was built by the Danish immigrants Hanson and Scove, for the Lake Michigan lumber trade. The vessel was less than the average size for the 1909 lumber fleet, she had a listed capacity of 550,000 board feet. Her Inland Lloyd's rating was A1 and valuation $35,000 in 1890.
Final Voyage

November 16, 1909. The steambarge Francis Hinton,heavily lumber laden and bound from Manistique to Chicago, encountered a gale and after discovering the vessel was taking on water, attempted to reach the Two Rivers Harbor. The water extinguished the fire in the boiler leaving the Hinton a crippled craft. The crew dropped anchor, but the high seas continued to pound and the with the bilge filling with water the captain had the anchor line cut and the vessel drifted towards shore where the Two Rivers Lifesaving crew observed the Hinton's plight. The lifesaving crew determined that the seas were too rough to attempt a water rescue The captain and the eleven man crew abandoned ship by deploying the yawl and made it to shore safely. The craft subsequently beached in Maritime Bay, approximately 1.9 miles northeast of the Manitowoc River, south of the life saving station. The following day, the lifesaving crew along with the Hinton's crew stripped the ruined vessel. Exposed to storms and ice the Francis Hinton went to pieces in shallow water and was forgotten until 1987 when rediscovered by sport divers.
Today

The lumber steambarge Francis Hinton lies somewhat broken and scattered in 15 plus feet of water. The bilge is extant; artifacts and machinery have been salvaged from the site. The Hinton was originally stripped after stranding. The bottom consists of hard clay with some loose silt deposits. Visibility is poor, averaging less than 10'. In addition to the bilges, remains of the engine works, boiler and a four-bladed, 8'9.5" diameter propeller are visible.
Due to its shallow depth and exposed location, the wreck has received a significant amount of damage from ice and wave action.

This site is buoyed by the State Historical Society.