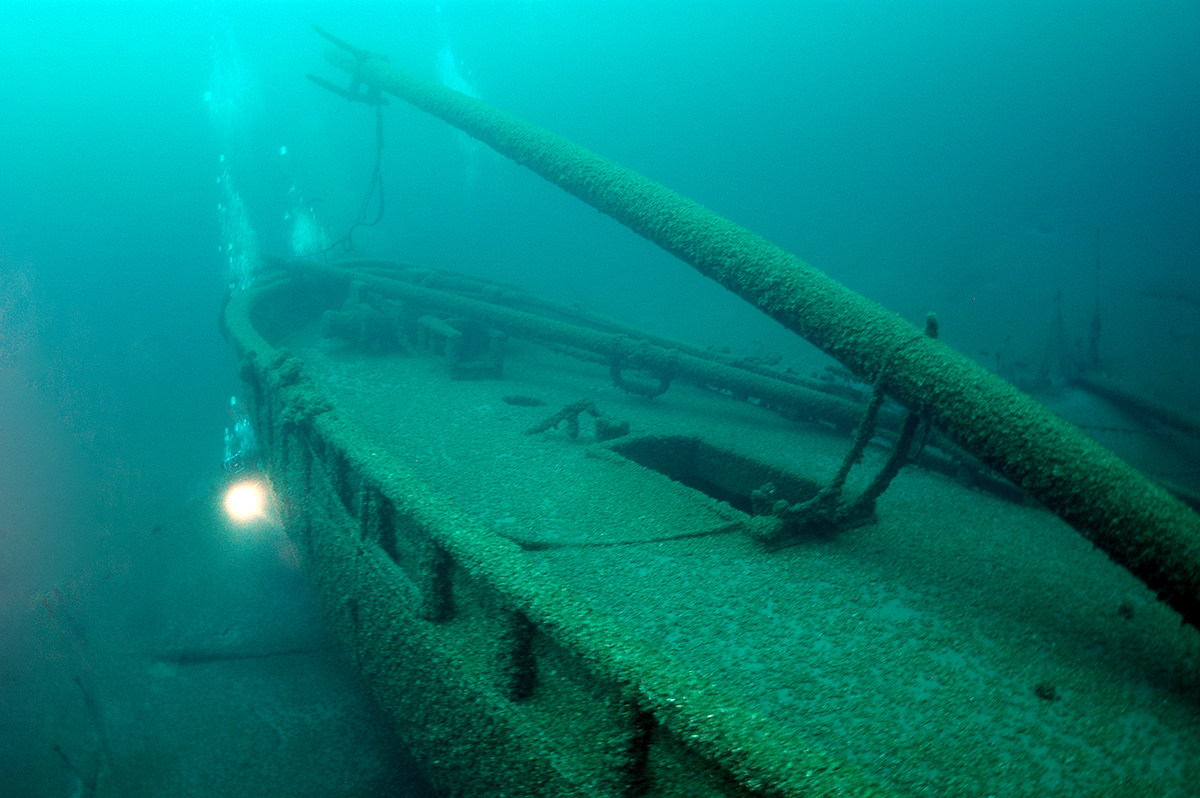 Archaeologist examines the bow of the Gallinipper. 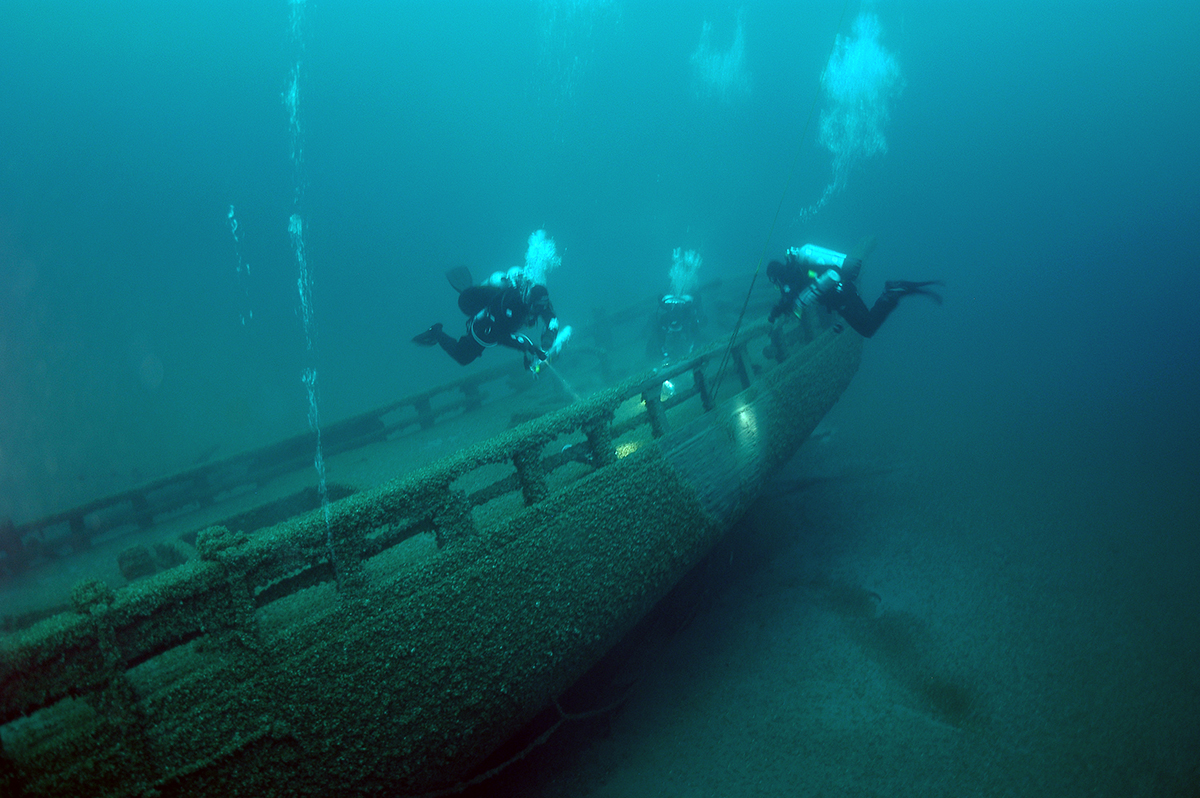 Archaeologists work on the stern of the vessel. 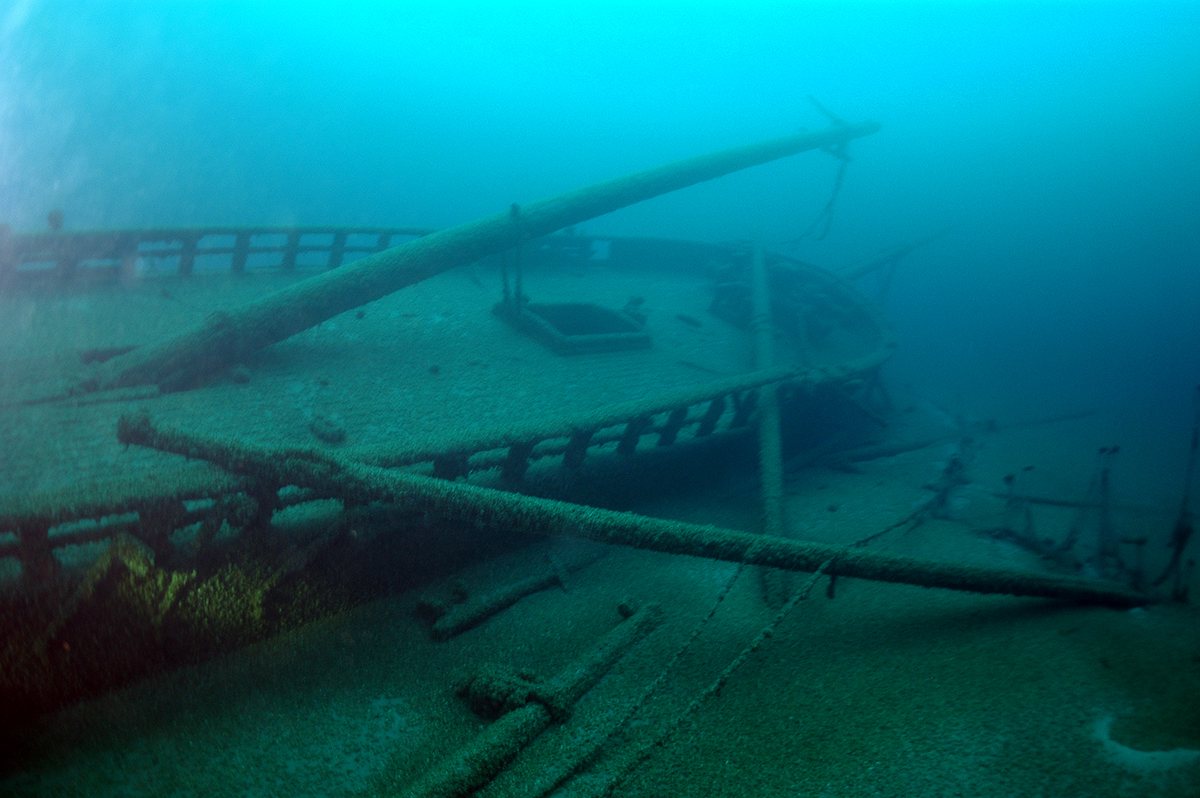 Rigging remains scattered across the sand off the vessel's starboard side. 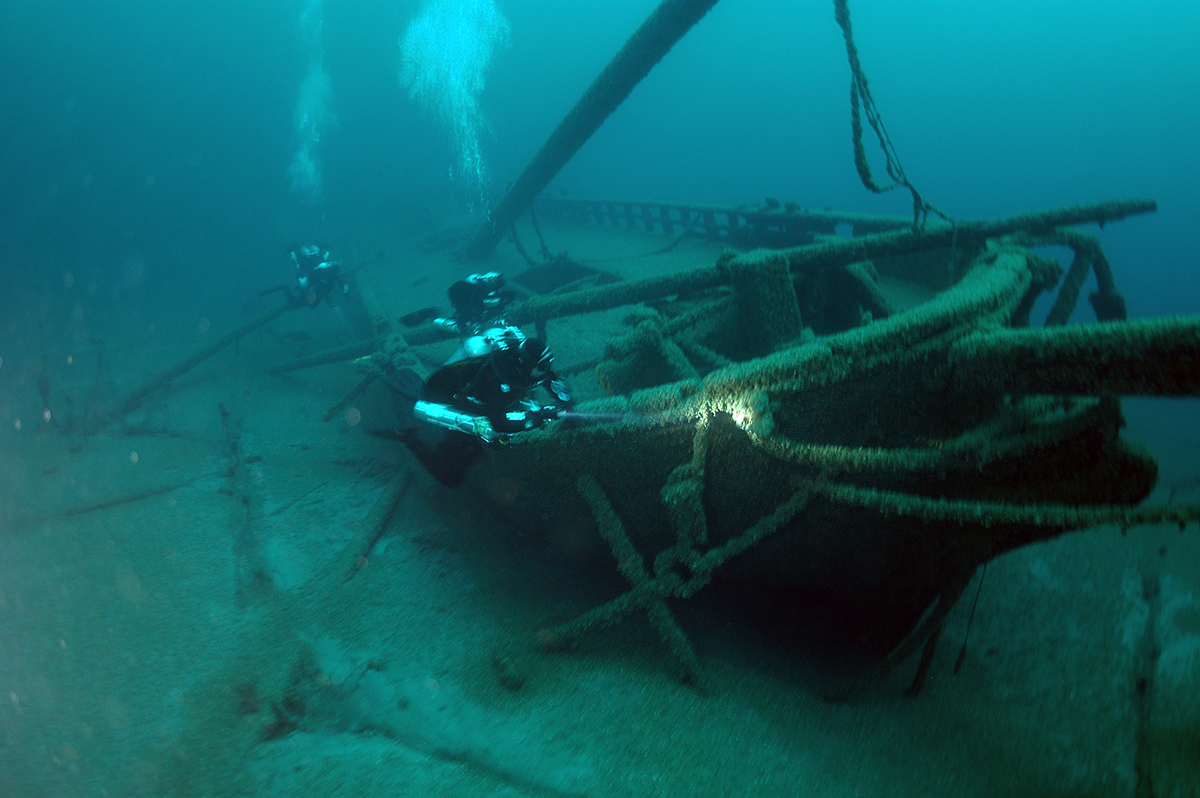 Divers swim up toward the bow of the ship.

The Gallinipper is Wisconsin’s oldest known shipwreck, having ties to early Wisconsin settlement and the fur trade, and it is an excellently preserved example of a very early hull type. In 1832 Michael Dousman commissioned the building the Nancy Dousman, named after his daughter and in 1833 the vessel started hauling goods and supplies from the east to the Wisconsin frontier and returning with loads of furs to the eastern markets. She changed hands a few times and was wrecked a couple of times. In 1846 she went through a major rebuild at Milwaukee by shipwright Henry Gibson which increased her cargo capacities, was renamed the Gallinipper, and was involved in the lumber trade out of Milwaukee. She changed hands a couple more times; July 7th, 1848 she foundered at Beaver Island; ran aground in Milwaukee in 1850; May of 1851 she sunk in the mouth of the Milwaukee River; and finally in July of 1851 would meet her end.
Final Voyage

On July 7th, 1851, sailing light, the 95 foot long schooner Gallinipper, was bound for Bay de Noque, Michigan from Milwaukee to pick up a load of lumber. Between Manitowoc and Sheboygan, 8-10 miles from shore, the Gallinipper capsized in a fast moving squall. The vessel righted herself, but again capsized by the storm, became waterlogged and sunk. Her crew of six, two passengers and Captain Henderson were rescued by the passing schooner Cleopatra. She did not sink immediately, however, and was later (July 9, 1851) spotted by the schooner Crook who reported that the Gallinipper was nearly underwater. Later, the schooner Convoy found the Gallinipper ten miles from Manitowoc, attempted to take her in tow, but was unsuccessful, and left her 10 miles southeast by south of Manitowoc after recovering her mainsail, mainboom, and main gaft. Afterwards, Captain Henderson went in search of the Gallinipper but had given up and returned to Milwaukee assuming that the Gallinipper had gone to the bottom.

The Lake Casualty List for 1851 reported that the schooner Gallinipper was a total loss. The vessel was valued at $3,000 and insured for $2,000.
Today

The wreck of the schooner Gallinipper was discovered in 1994 by a commercial fisherman who snagged nets on the previously unknown wreck. Divers discovered in 1994 that the vessel was a schooner but little else. In 2009 an archaeological survey was conducted by the Wisconsin Historical Society and the site was placed on the National Register of Historic Places in December of 2010.

The Gallinipper lies in 210 feet of water and is pretty much intact and upright. A heavy layer of silt and mussels cover the hull. She lists 20 degrees to starboard and her stern is slightly lower than her bow. Her hull is entirely intact with the exception of her standing rigging, which was damaged as a result of fishing nets snagging her. The ensuing efforts to free the net resulted in the vessel's foremast being pulled from the hull and brought to the surface, it is now on display at the Rogers Street Fishing Village in Two Rivers, Wisconsin. The mainmast was not pulled from the hull, but it was pulled from the mast step and toppled forward, and now rests at an angle over the the vessel's bow. Much of the remaining rigging lies on the lake bed off the hull's starboard side, including a boom, gaff, topmost, and two yards. A small amount of fishing net remains on the site, wrapped around the stern and running along the lake bed on either side of the hull, in addition to sections of net that drape over the mainmast and forward deck.
Nearby
View fewer
^
© 2023 - Wisconsin Sea Grant, Wisconsin Historical Society