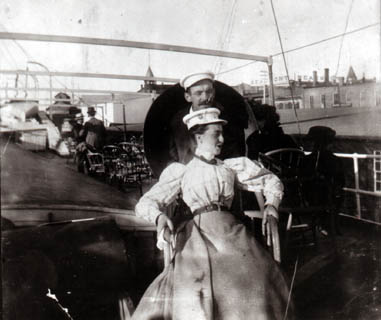 On deck of the Atlanta 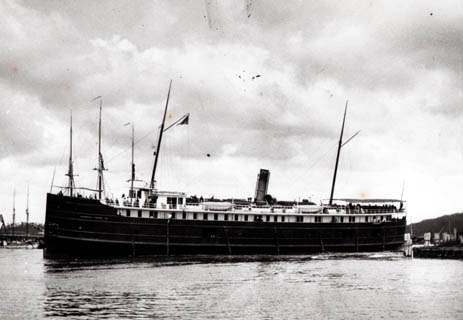 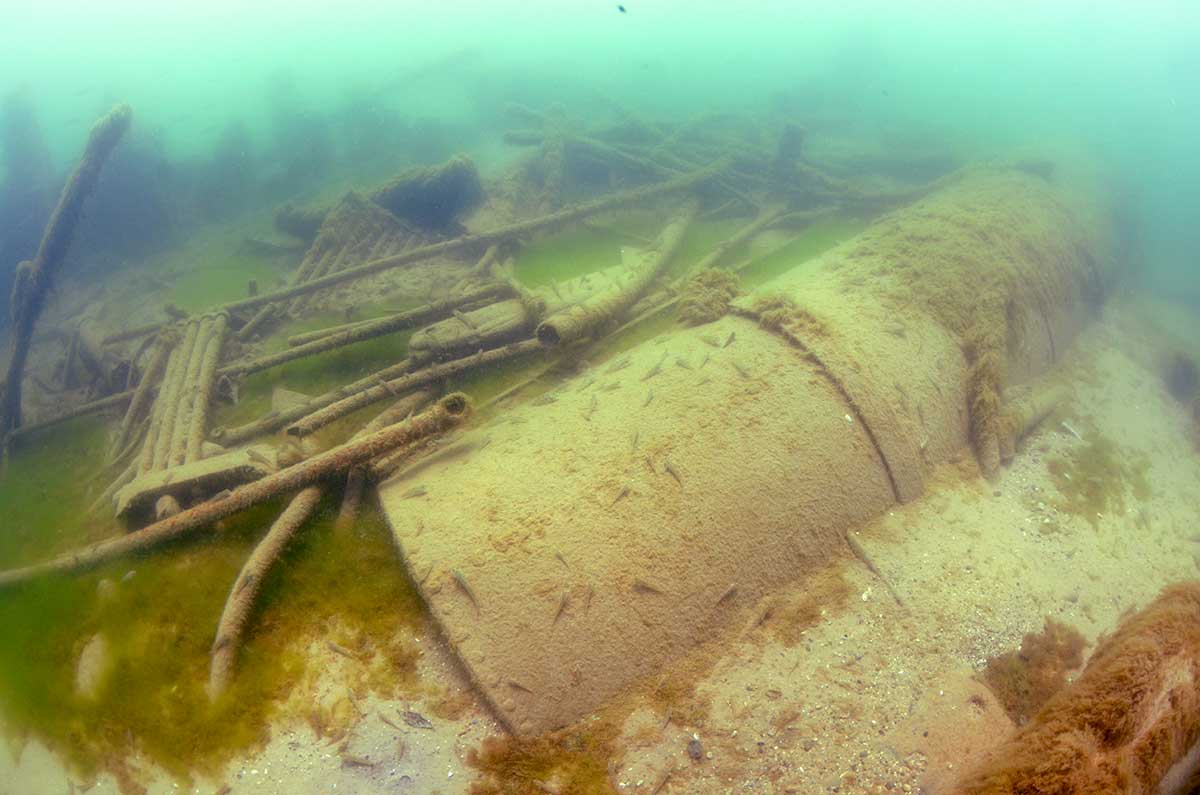 Smokestack of the Atlanta 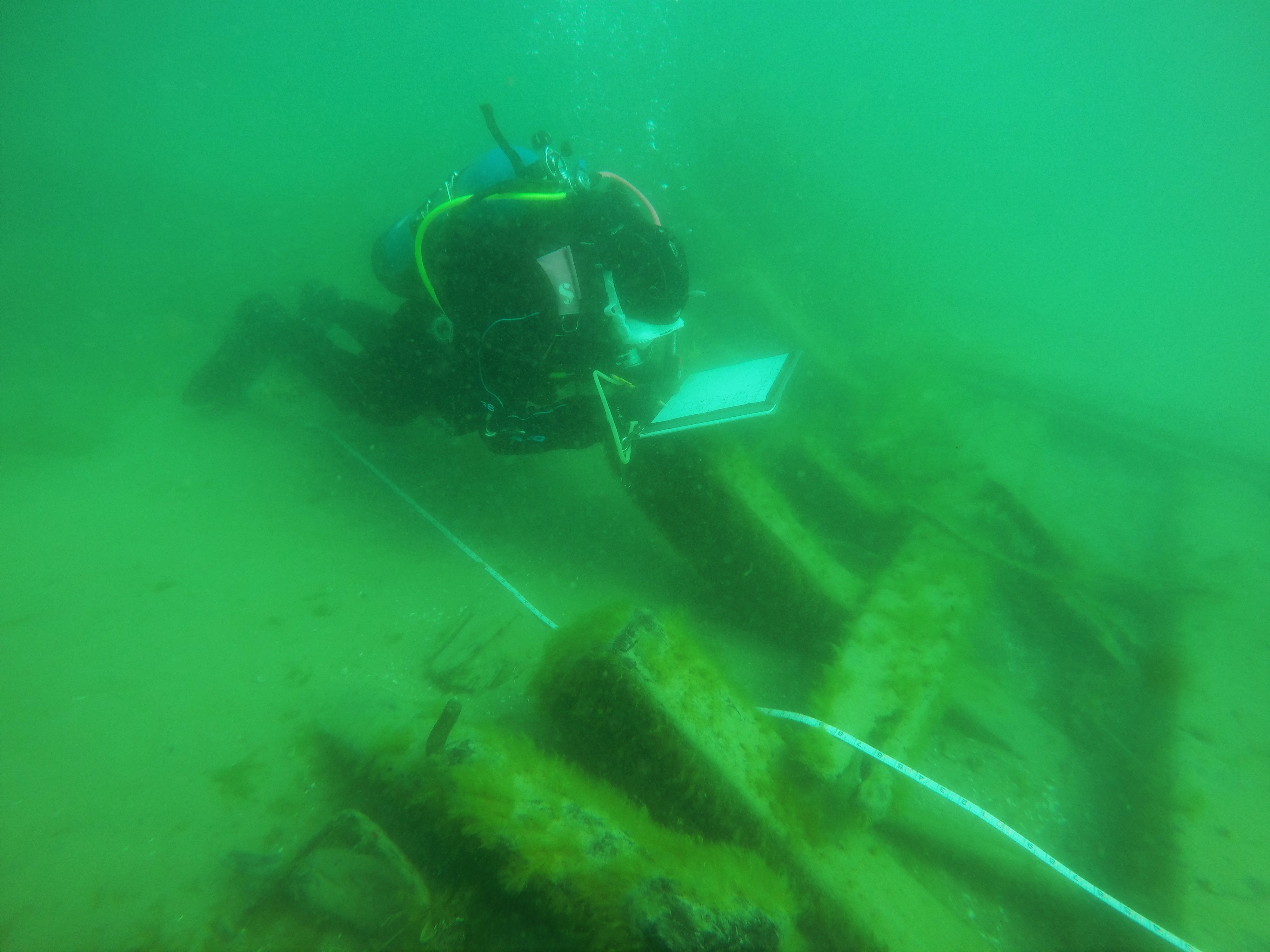 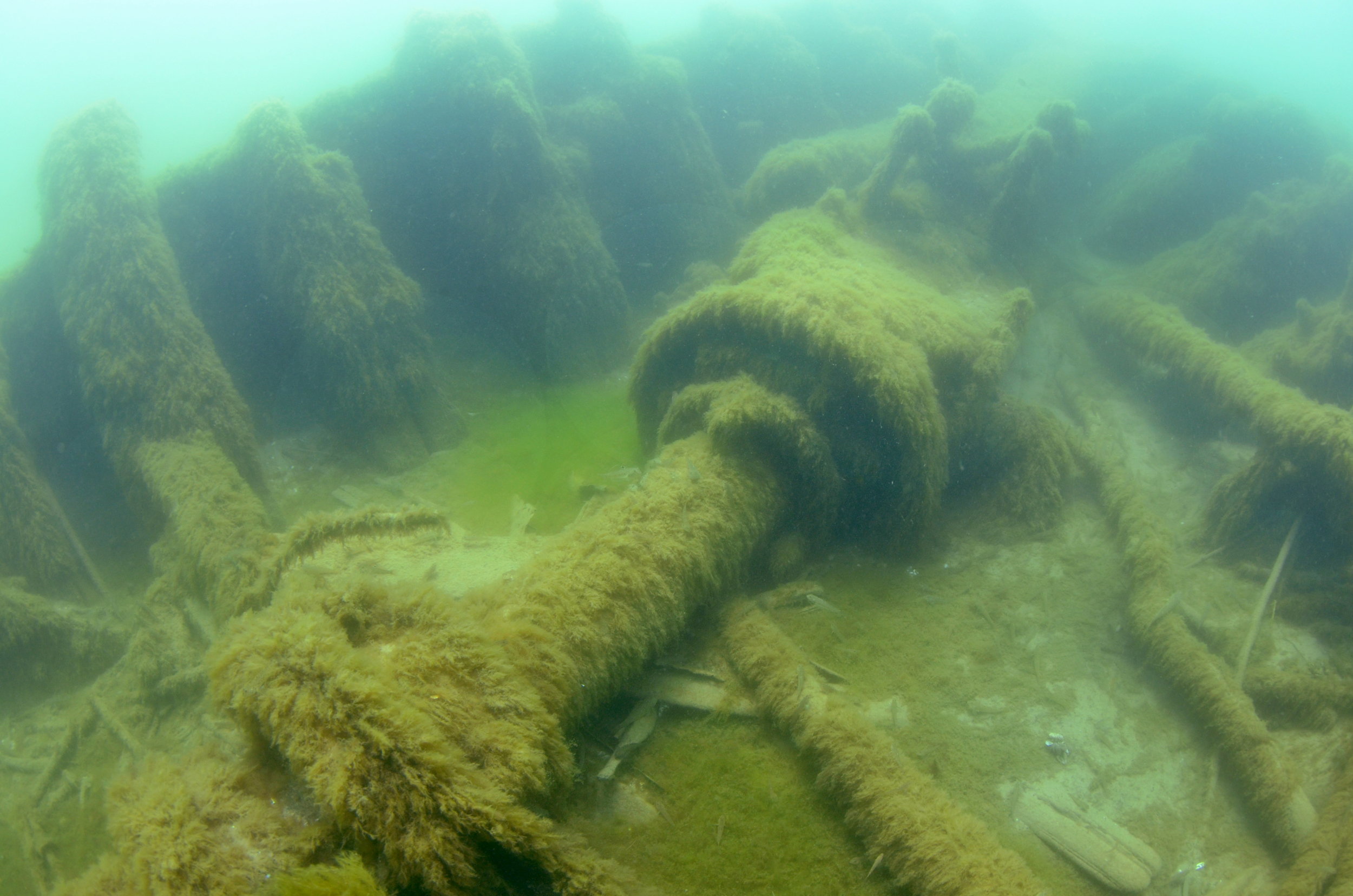 Atlanta was built in 1891 by the Cleveland Dry Dock Company of Ohio. The vessel was a screw steamer with a fore and aft compound engine and two scotch boilers. Atlanta was owned by the Goodrich Transportation Company to transport passengers and package freight around Lake Michigan. The vessel steamed on a regular cross-lake route between Chicago, IL and Muskegon and Grand Haven, MI during the navigation season (March-December) before being docked for the winter. In 1895 Atlanta received a wider afterbody and two new scotch boilers located further forward in the hull bringing the vessel's stern out of the water 20 more inches. After 1895 Atlanta still ran from Chicago to Muskegon/Grand Haven during the navigation season then was put on Wisconsin's winter fleet visiting ports along Wisconsin's Lake Michigan coast from Chicago as far north and Green Bay, and Marinette. The steamer ran these two routes at various times carrying passengers and manufactured goods until its final voyage.
Final Voyage

At 11:15 on March 18, 1906 the Goodrich steamer Atlanta was heading south from Sheboygan to Milwaukee carrying 65 passengers and cargo including porcelain, enamelware, metal ware, leather, and wooden furniture. Around noon, 14 miles south of Sheboygan, crewmen discovered a fire in the hold of the vessel. The fire was fought with precision by the well-practiced crew to no avail. The new automatic sprinklers and fire apparatus, tested six days prior, could not stop the blaze. As the fire grew, the vessel was halted and focus turned to the lifeboats. The Smith Brothers’ fishing tug Tessler witnessed Atlanta’s distress and came about to help the passengers and crew. All personnel were safely transferred to the tug except one. Deckhand Michael Hickey tried to jump from the steamer onto the tug, but misjudged the distance and fell to his death between the vessels. The cook was valiantly saved by fisherman Charles Klein. Screams by the steamer’s cook, who was trapped in the pantry, could be heard. Klein climbed onto the burning vessel, widened a porthole near the pantry, and pulled the cook to safety. All the passengers and crew were transferred from the packed fishing tug to the passing steamer Georgia who steamed the passengers back to Sheboygan. Once free of Atlanta’s passengers and crew, Tessler towed the burning Atlanta ashore and left it to burn to the waterline. On 21 March 1906, the vessel’s enrollment documents described the steamer as a total loss. The cost of the vessel and cargo totaled 200,000 dollars

14 years later Atlanta's title was purchased by Leathem & Smith Towing and Wrecking Co. of Sturgeon Bay and salvage of the vessel began on 11 August 1920. Diver Perl Purdy and his crew of divers had the task of retrieving Atlanta’s boilers, engines, and any valuable cargo. Reports claim that most of the cargo and metal was destroyed in the fire and that the machinery was only worth money for scrap value. The steamer’s scotch boiler was not scrapped, but placed in the newly built steamer Stuart in 1921. Stuart was a 110 foot steamer built at the Wolter & O’Boyle Company of Sturgeon Bay
Today

The wreck of the passenger steamer Atlanta lies in 17 feet of water, on a sand bottom, in Lake Michigan on a heading of 40-degrees, 800 feet from the shore, 1.02 miles north-northeast of Amsterdam Park’s boat launch in the Town of Cedar Grove, Wisconsin. The wreckage is quite large, with the basic outline of the ship intact sitting off the bottom, at places 10 feet high. Evidence of the vessels metal hogging trusses and diagonal bracing can be found draped outside of the outer hull. The hull structure is filled with warped metal and piping of various sizes and shapes, remnants of the vessels plumbing, electricity, and propulsion machinery. Atlanta's propeller shaft, stuffing box, shaft log, and pillow block can also be seen on the site. Artifacts such as enamelware, glassware, and other items have been found by divers as still can be found in the wreck site. The shifting sand exposes or covers different parts of the wreck each year, offering more or less to be seen on each visit.
In the summer of 2016, students from East Carolina University, Program in Maritime Studies worked with the Wisconsin Historical Society on an archaeological survey of the site, documenting it in detail.