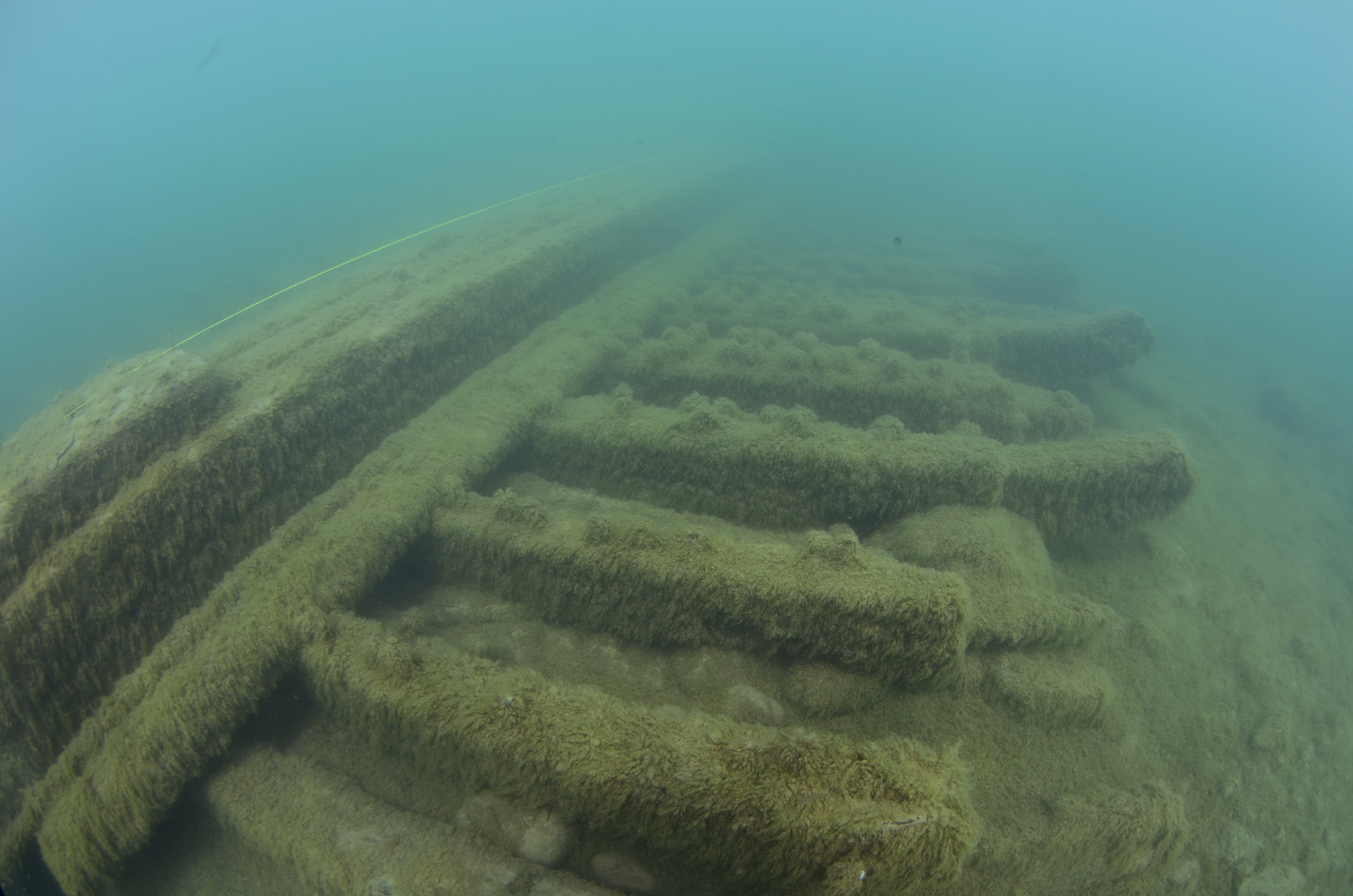 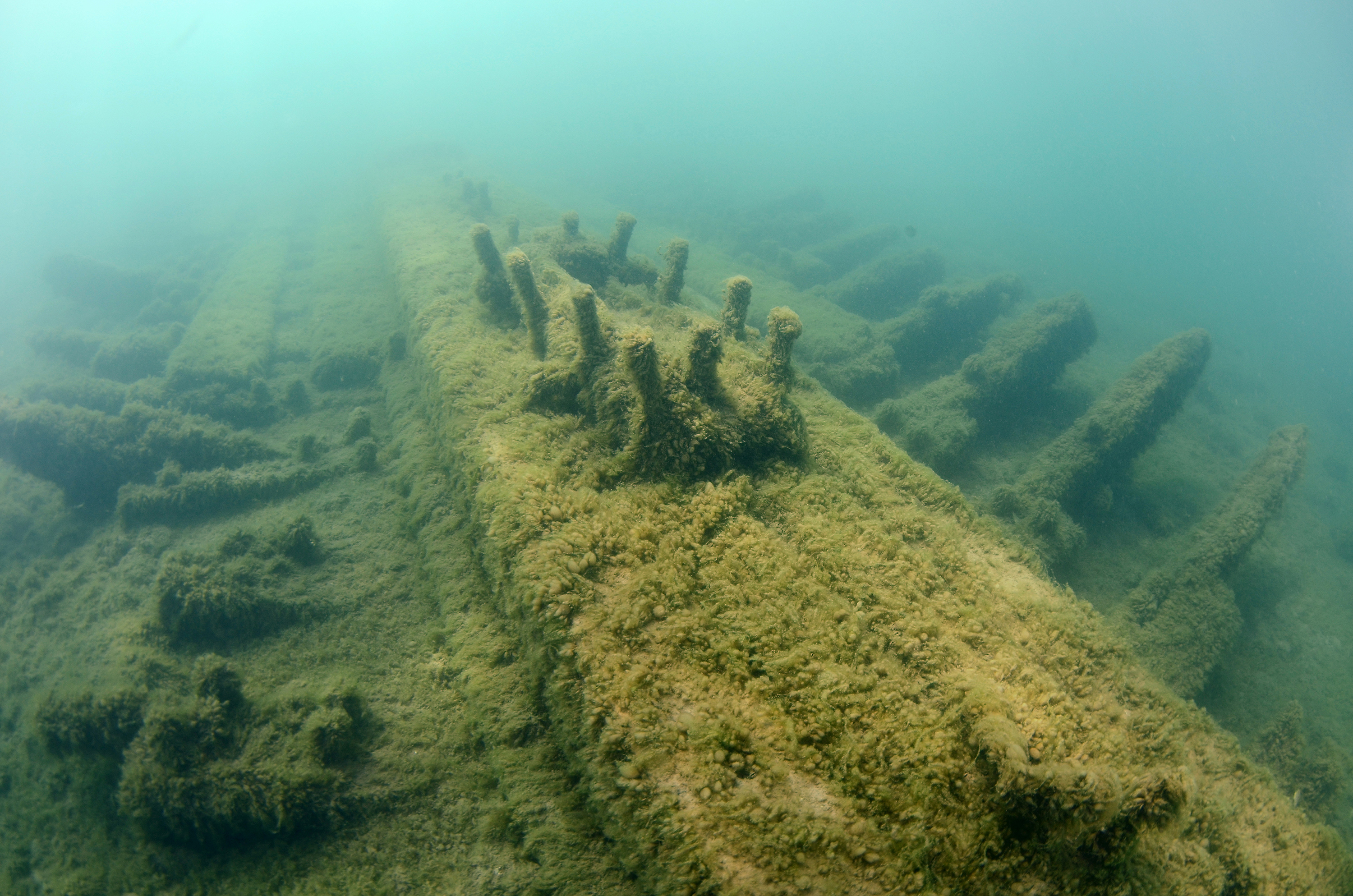 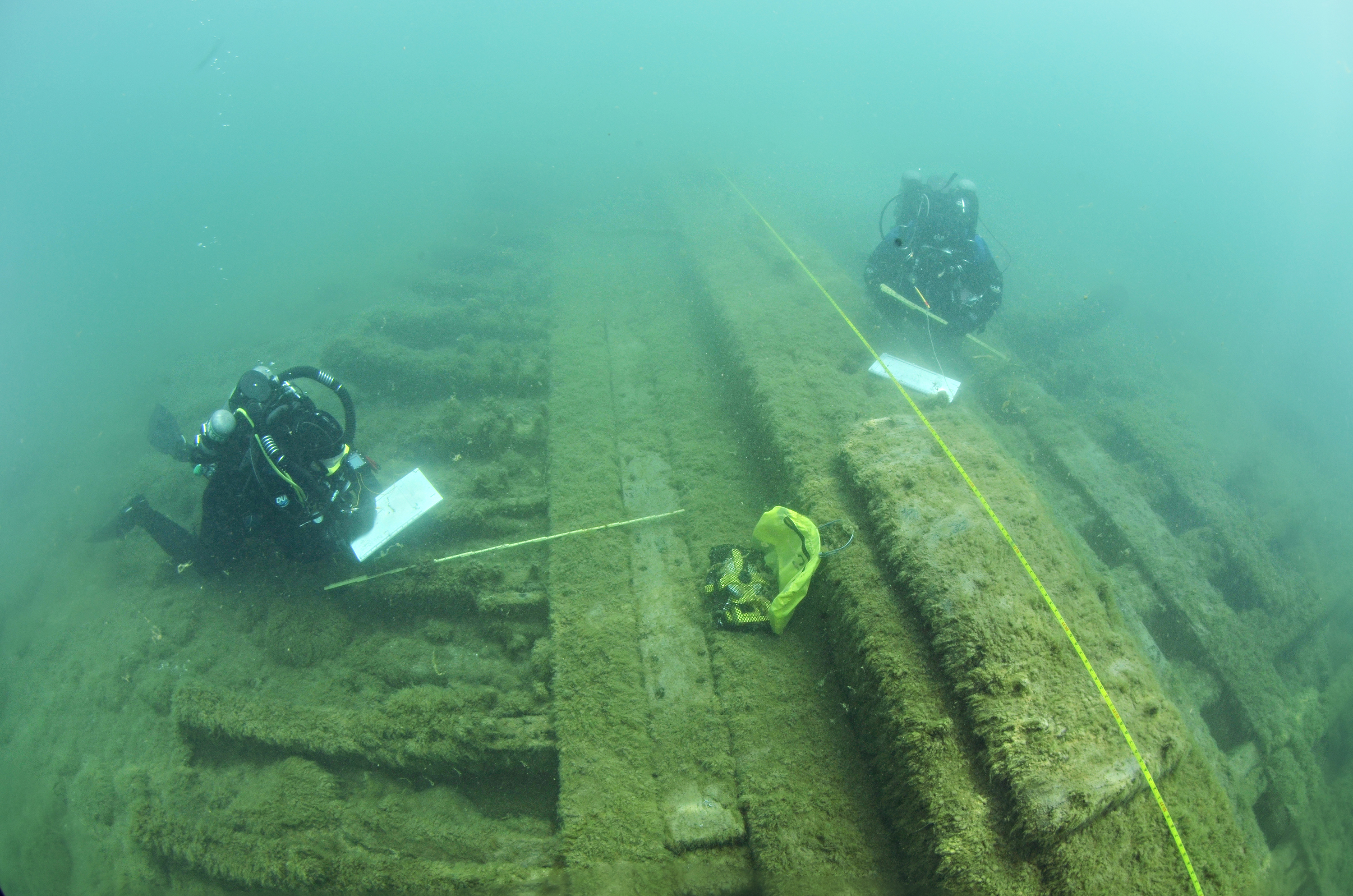 The canal schooner Northern Light was built in 1853 by J. Oades in Clayton,New York. Built for merchants John N. Fowler and Henry Esselstyn of the firm Fowler & Esselstyn of Clayton, New York, the Northern Light primarily operated in the grain and lumber industries. In 1866, the vessel was rebuilt and relaunched with a second centerboard, as the canal schooner Montgomery by S.G. Johnson in Clayton, New York. The vessel was valued at $16,000 and rated A2 by the Board of Marine Inspectors and her official registry number was 16348. Montgomery operated in the region for another 24 years.
Final Voyage

On the morning of 5 November, while en route to Sheboygan with a cargo of coal consigned to the C. Reiss Coal Company, Montgomery came ashore during a gale, grounding in eleven feet of water eight miles north of the city near Stoney Creek. The vessel immediately began to fill with water. Despite the vessel flying colors all day, Coast Guard patrolmen walking the beach did not sight the stranded ship. Fortunately, no lives were lost. The tug Sheboygan went to her assistance the following day but failed in the attempt to get the schooner off as the vessel had worked over the rocks near shore. Four days following the accident Capt. J.V. Tuttle representing the interests of the insurance companies went to the Montgomery and determined the ship a total loss. She was insured for $5,333, of which $2,500 was in London Assurance, $1,833 in Commercial Union, and $1,000 in Michigan Fire and Marine

On 9 September, the tug Sheboygan towed the schooner Elva and a crew of fourteen men to the Montgomery’s wreck site. They went to work stripped her of her canvas and running gear and the following week they removed her spars. Her cargo of coal proved difficult to salvage. The steam coal aboard could not be pumped out with a centrifugal pump. The smaller portion of her coal cargo was blacksmith’s coal but the quantity was so small that wouldn’t pay for the effort to save it. The rights for any further remains of the ship were sold to Captain Oley Groh of the Sheboygan Lifesaving Station. The ship’s enrollment document was surrendered at the port of Toledo on 12 November 1890

Montgomery’s location remained largely forgotten until the summer of 1958 when off duty Army personnel based at Camp Haven discovered the wreck about 1,000 yards off shore and began exploring it with skin diving equipment
Today

The location of the Montgomery site was forgotten until 1958 when skin divers, who were stationed at Camp Haven located the wreckage and dove it in their spare time. The site became popular with divers in the 1970s, but the exact location of the site was lost in the intervening years. The site was brought to the attention of the Wisconsin Historical Society in June of 2015 by Steve Radovan, but the site was not located until 2018. WUAA volunteers and Society archaeologists documented the site in June of 2018.

Today the Montgomery is located on a rocky bottom 0.45 miles east of the Whistling Straights Golf Course, in the town of Mosel, Sheboygan County, Wisconsin in 12 feet of water on the bottom of Lake Michigan. The vessel’s keelson and floors remain intact on the site along with its two centerboard trunks, and hull planking.
Map