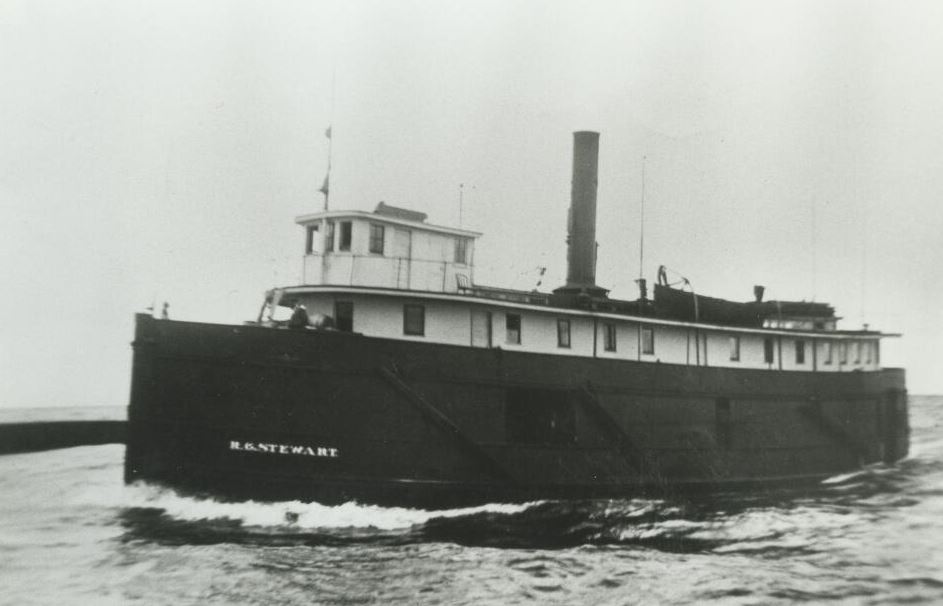 The R. G. Stewart was a wooden hull, steam screw used in the passenger and freight trade along both the north and south shores of Lake Superior. She had been originally constructed in 1878 as a ferry and excursion boat to be used on the Niagara River between Black Rock New York and Fort Erie. The vessel was built by George H. Notter at Buffalo, New York. The official registry number was 110341 and in 1884 she was rated A2 and valued at $12,500 by Inland Lloyds. By 1888 her rating was upgraded to A1 1/2.

1883: Rebuilt at the John Oades shipyard in Detroit.

June 1893: Collided with the freighter Buffalo near the Chicago harbor.

September 1894: Lost her rudder and towed in by the tug Ella G. Stone.

1896: The R.G. Stewart was chartered to carry the Kirkhart & Ryan's Circus around Lake Michigan.
Final Voyage

On June 3, 1899, while on route from Ontonagon to Duluth with freight, livestock and three passengers, the small coastal passenger and package freighter R.G.Stewart ran aground on Michigan Island, Apostle Islands, in a heavy fog. The next morning, during efforts to release her using a kedge anchor and her engines, fire was discovered in the woodworks over the boiler. The fire quickly spread to the deck and attempts to put it out were futile whereupon the cattle were untied and allowed to make their escape. The three passengers and eight crewmen ran for the yawl which had already been launched. The wheelman, George McKenna, was the last to jump into the yawl, but he landed on the gunwale upsetting the boat. Ironically, McKenna was the only one not to survive, the others in the crew and passengers escaped by either swimming to the nearby shore or by the yawl while the Stewart burned to the water's edge.
The Stewart was insured for $6,000 and worth some $10,000.
Today

The site of the R.G. Stewart wreck was located accidentally on the southeast side of Michigan Island in 1983 by an National Park Service volunteer tending the Michigan Island lighthouse.

Remains of the hull and an artifact scatter from the superstructure of the R.G. Stewart are now partially covered by sands in the relatively shallow waters off the southeast shore of Michigan island. They cover an area approximately 165 feet long and 170 feet wide. The hard bottom is made up of mixed cobble and large boulders.


On October 10,2019 Susan Caine sent the following account regarding the R. G. Stewart:
"I would like to correct a misstatement in the current timeline of the discovery of the wreck of the Stewart in that the discovery of the R.G. Stewart was not accidental. Thom Holden, who at that time was working at the Lake Superior Maine Museum in Duluth, MN, told us about the wreck of the R.G. Stewart. From the information Mr. Holden provided, we knew the Stewart was wrecked after running aground in fog at a location about 1 mile east of Michigan Island Lighthouse.

On a beautiful summer day, Nic Caine, our 11 year old son, along with my husband and I, set out from Michigan Island Lighthouse where we were VIPs (Volunteer lighthouse keepers for the Apostle Island National Lakeshore). We were interested in searching for any remnant of the wreck of the Stewart. Once in the area where the wreck was thought to have occurred, we began a visual search using snorkeling gear. Our son Nic was the first to sight what appeared to be possible wreckage of the Stewart. We quickly established that the wreckage appeared to be consistent with that of a shipwreck and reported the news of our son's finding to the Park Historian at the Apostle Islands National Lakeshore Headquarters in Bayfield, WI."