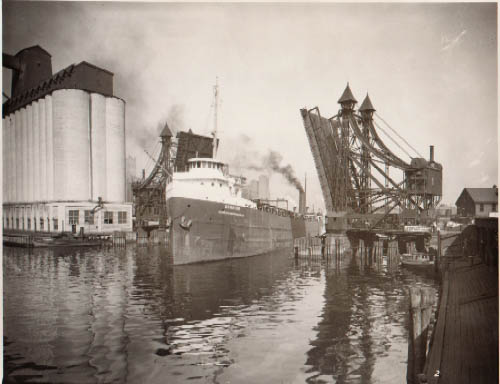 The steel bulk carrier Senator was built for the Wolverine Steamship Company and employed early steel vessel construction techniques that included steel arches and a moveable water ballast system. The ship was bought and sold many times, finally being purchased in 1929 by the Nicholson Universal Steamship Company who altered her tonnage and added a cargo elevator to aid in transportation of new automobiles on the Great Lakes.
Final Voyage

On the morning of October 31, 1929, the Senator was rammed amidships by the iron ore laden bulk carrier, Marquette off Port Washington, Wisconsin, while navigating in a dense fog. The fog was so thick the crews of the boats said they couldn't see one another until they were too close to avoid the crash. The Marquette’s captain neglected to turn back to assist the crew of the Senator; and seven men drowned. The Senator turned onto its port side and sank in only five minutes. On that day of the accident, she was transporting 268 Nash automobiles from Milwaukee to Detroit.
Today

The SS Senator lies in nearly 500 feet of water 16 miles northeast of Port Washington. She is setting upright facing in a northeast direction. The pilot house and engineering spaces are intact. Today the cargo on Nash automobiles remains with the vessel. Cars that were attached to deck have slid aft onto the sand, those that remain inside the vessel's hull remain chained in place. This grouping is considered the largest unmodified collection of early Wisconsin-built automobiles known to exist. The shipwreck was reported by Wisconsin Department of Natural Resources in 2015. Data on the shipwreck and current observations were collected by remotely operated vehicle (ROV) and multi beam sonar imagery.
Nearby
View 114 more View fewer
^
© 2021 - Wisconsin Sea Grant, Wisconsin Historical Society