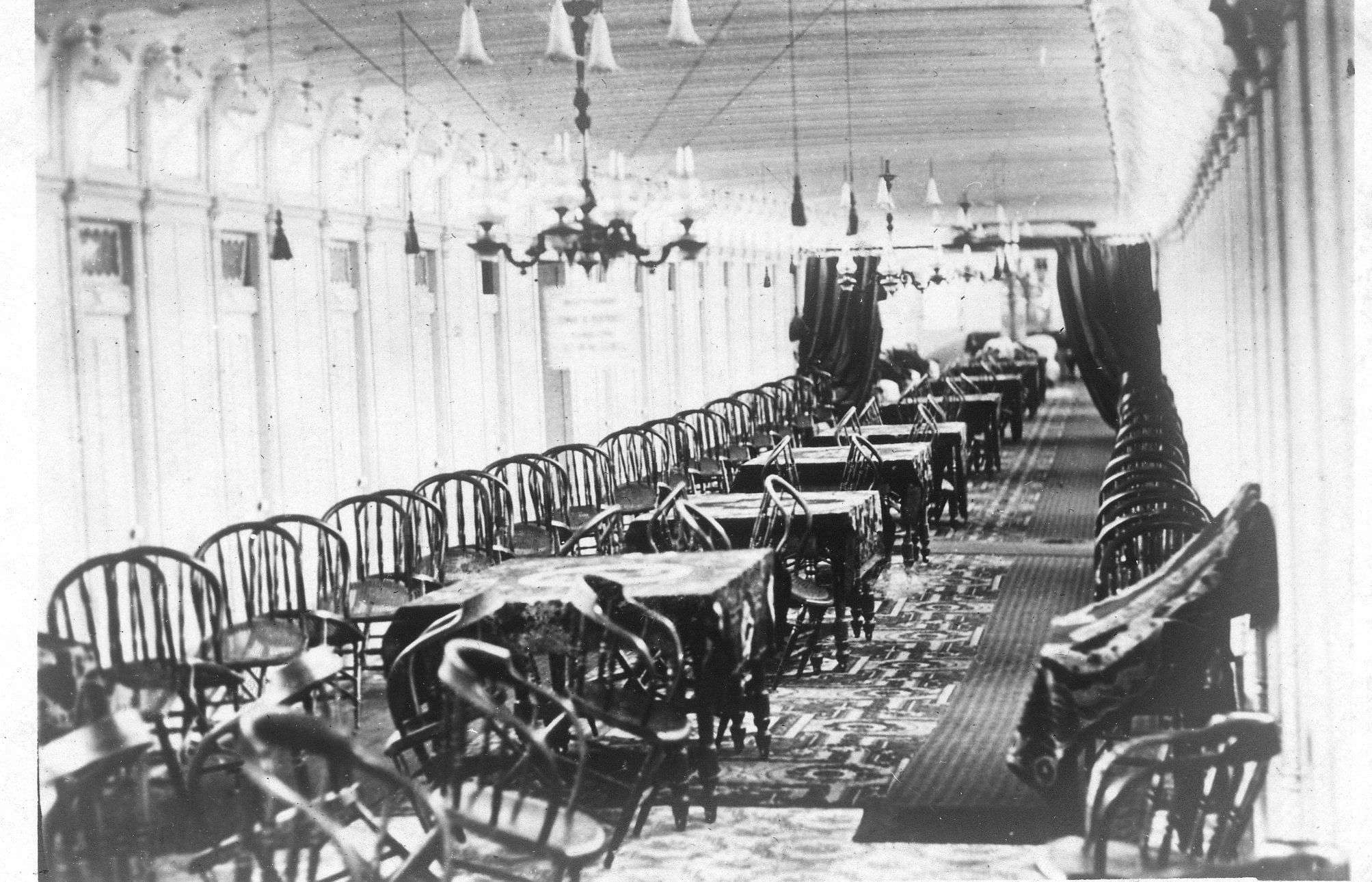 photograph of the luxurious interior of the War Eagle 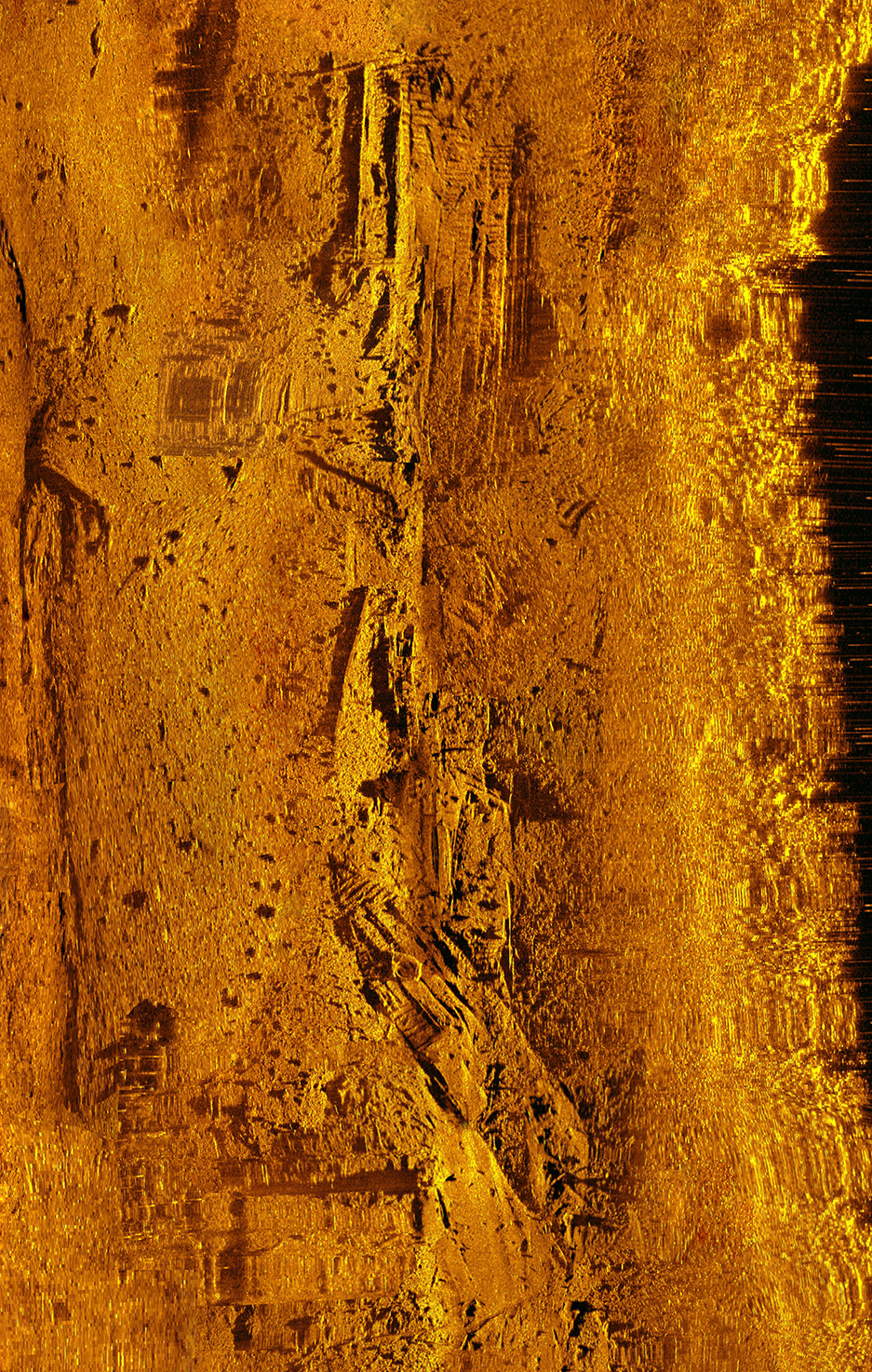 The War Eagle was built in 1854 in Fulton, Ohio for the Galena & Minnesota Packet Company of Galena, Illinois. She was a 296 ton, sidewheel steam vessel with a 219 foot long oak hull and had 46 staterooms. The War Eagle was owned by a variety of companies throughout her career, yet she continuously service the upper Mississippi River; transporting passengers and freight between Galena and St. Paul and ports in between.

The most prestigious event that occurred in the packet’s season was its involvement with the transportation of 1st Minnesota volunteer regiment. After President Lincoln’s call for troops at the beginning of the Civil War, Minnesota’s first regiment gathered at St. Paul for training. On 22 June the regiment left St. Paul for Harrisburg, Pennsylvania. For the first stage of the journey the steamboats War Eagle and Northern Belle were commissioned to take the regiment to La Crosse and Prairie du Chien to meet their respective railroad connections. Colonial Willis A. Gorman accompanied companies F, G, H, I, and K onto Northern Belle and were transported to La Crosse to continue their journey on the La Crosse & Milwaukee Railroad. Lieutenant Colonial Stephen Miller accompanied companies B,C, D, and E onto War Eagle and taken to Prairie Du Chien to meet the Milwaukee & Prairie du Chien railway train. Both parties came together in Janesville, Wisconsin and continued onward arriving in Chicago on 23 June
Final Voyage

On Sunday 15 May 1870 War Eagle arrived at La Crosse in the afternoon to offload passengers. Around 6:00 PM the packet traveled north of the city to the Milwaukee Road Depot to meet the midnight train. After the passengers were aboard, freight continued to be loaded onto the steamboat. Barrels of kerosene lamp oil, also interchangeably called Danforth’s Fluid and Coal Oil, were loaded onto and stored on port side of the vessel amidships. Upon loading the cargo, one barrel was discovered to be leaking. As the barrel was being repaired, it caught fire. It is uncertain how the fire was started. One account claimed that while the cooper was tightening the bands of the barrel, his lamp fell over and caught the barrel on fire. Another account stated that a boy walked past the barrel and the bottom of his lamp fell out catching the barrel on fire. Although non-explosive, the kerosene was highly flammable and soon the barrel and leaking fluid were on fire. Attempting to dispose of the blazing barrel and limit the danger, the crew rolled it off the port side of the War Eagle into the river. Unfortunately, the barge Webb was moored alongside and the barrel smashed onto its deck causing the barge to also catch on fire. The fire alarm was sounded and passengers escaped by any means necessary. Some managed to use the front gangway but the majority of passengers jumped overboard into the river to escape the flames. War Eagle was reportedly carrying eight barrels of gunpowder in her bow. It was feared that the fire would reach the gunpowder and create an even bigger disaster. Fortunately the vessel sank before this occurred. The flame spread to the railway depot destroying the grain elevator, main depot, warehouse, and docks. The Milwaukee & St. Paul Railroad lost a passenger car, six freight cars, one express and baggage car, and one mail car. The steamboats Keokuk and Molly Mohler managed to gain enough steam to escape the flames although both received damages. The damage was estimated at a total loss of over $200,000. The Wisconsin State Journal listed the monetary value of the loss as follows:

The hull and machinery of the War Eagle were reported to be moved on 15 July 1870. A derrick was used at the wreck to remove the guard and wheel. A portion of the vessel was raised to the waterline reportedly waiting to be pumped out. By 14 July the attempt to raise the War Eagle had ceased. The water level had decreased and the remnants of the shipwreck needed to be removed for navigational purposes. Captain John B. Davis, Chief Engineer of the Army Corps of Engineers, reported that they removed the remains of the War Eagle from the navigational lane of the railway depot into deeper water on 2 September 1874. No further details of the removal were documented. Usually when the Army Corps of Engineers “removed” a wreck, the vessel was not actually removed from the water. Instead the vessel’s hull was dynamited and the broken pieces dragged into deeper water.
Today

The War Eagle shipwreck site has witnessed a variety of site disturbance since its loss and initial salvage and removal. Dredging operations near the sight occurred in 1897 and the 1930s. The Mobil Oil Company acquired the property adjacent to the War Eagle site and installed a dock over the site in 1939-40. The site has been the subject of heavy visitation and artifact collection over the years. In 1931 and 1934 extremely low water levels exposed portions of the vessel to outside elements and heavy visitation and subsequent artifact looting from the residents of La Crosse. In 1962 and 1963 the Winona County Historical Society (Winona, Minnesota) conducted large-scale dives to collect artifacts to be exhibited. In 1980 the Wisconsin Historical Society officially listed the War Eagle as an archaeological site, a few years later it was catalogued as a state burial site following an eyewitness report indicating a skull was found on site. The first survey of the War Eagle was conducted in August of 1985. Army Corps’ divers investigated the proposed project area and shipwreck site. In 1986 a team of divers from the University of Wisconsin - La Crosse and the La Crosse Dive Rescue Squad visited the site to collect photographs. Unfortunately, visibility issues prohibited any data collection. In 2000 the Mobil Oil Company contracted with Strata Morph Geoexploration, Inc. to monitor the removal of the docks that were installed in 1939. Divers from Strata Morph Geoexploration swam underwater transects across the site to inspect the dolphins prior to removal and monitored the removal of the pilings. Each piling was cut a foot above the river bottom or any extant structure of the site.

Surprisingly, with over 30 years of diver visitation and archaeological excavations, neither a complete nor detailed site description nor map has been created for the site. The dangerous diving conditions and low visibility prohibited a complete overview of the site and, as evident in previous archaeological survey reports, deterred use of certain technological survey techniques.

On 28 May 2018 Society maritime archaeologists partnered with Crossmon Consulting, LLC to collect side scan sonar data of the shipwreck War Eagle. This project was conducted to determine the feasibility of using side scan sonar technology in poor quality and hazardous environments. The War Eagle shipwreck site was a prime candidate for such a feasibility study for a variety of reasons. Firstly, the location of the site is known and has been frequently visited by divers in the past. Secondly, the site’s location at the confluence of the La Crosse, Black, and Mississippi Rivers provides the perfect conditions to test the usefulness of this technology in black water, high current conditions.

The War Eagle shipwreck and associated debris field begins on the eastern shore of the Black River and expands westward 261 feet. Extending from north to south 765 feet, the site spans a total of 4.58 acres of river bottom consisting of the hull structure of the barge Webb, main wreckage of the War Eagle, non-contributing remains of the Mobil Oil dock and its three associated dophin pilings, and various debris scatter covering the entirety of the site.