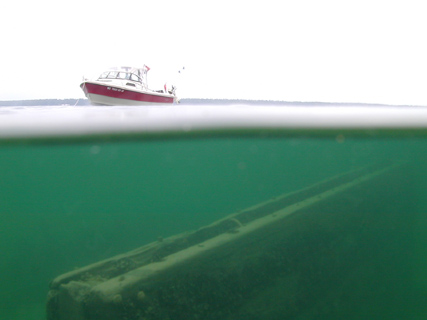 One of the Boaz's two centerboard trunks 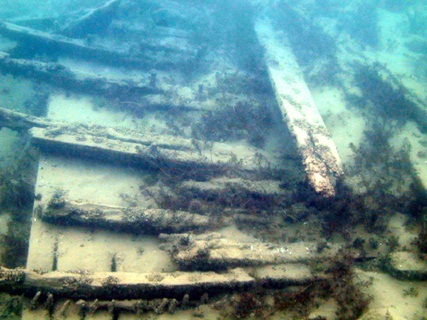 Frames and outter hull planking near the bow 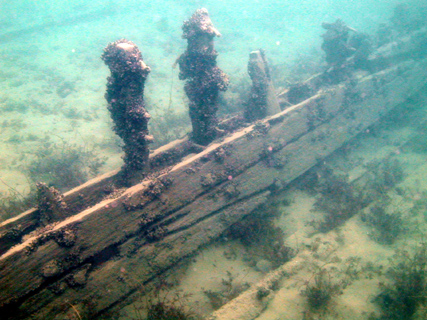 A portion of the Boaz's mostly buried hull 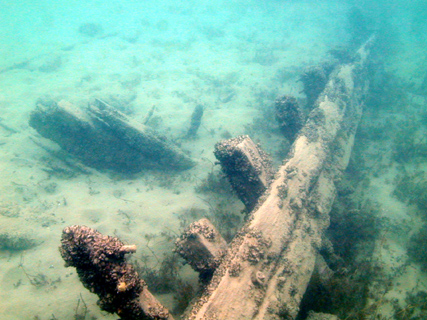 The wooden three-masted schooner Boaz was built in 1869. She spent her life on western Lake Michigan between Door County and Racine often loaded with lumber.

November 11, 1900. The schooner Boaz, bound from Pierpont, Michigan, to Racine, Wisconsin, with a cargo of elm lumber, was caught in a storm and began leaking. She headed to North Bay (a few miles north of the Cana light near Racine, Wisconsin) for refuge. The crew set the anchors to keep her off the beach, but using the yawl, they abandoned the vessel during the night and were rescued by the steam-barge Two Myrtles the following morning. The Two Myrtles cut the anchors and towed the Boaz into North Bay running it onto the beach near Marshall's pier.
The Boaz was left in North Bay and eventually sunk. Her cargo was salvaged and she was abandoned. Captain Thomas Isabell, a local salvor, went to North Bay three years later and secured the spars.
Today

Vessel lies in a small lagoon at the SW end of Marshall's Point, North Bay, in 15' of water. Bow is oriented WSW. Bottom is light sand and weed choked. Hull is generally intact to the turn of the bilge; it protrudes from the bottom 2'5" amidships, and 5'7" at the inshore side of the centerboard trunk; the wreck is visible from the surface. Much of the bilges are covered in sand, at least 12" deep. Sections of the bilge ceiling are exposed above the overburden, as are five strakes of stern ceiling and the stern post. Other features include two pumpshafts (standing 16" from the bottom); two centerboard trunks (17'3" x 1'4" and 16' x 1'2"); miscellaneous planking inshore of the site, and lengths of hawser-laid cable found in the vicinity of the pumpshafts which may belong to the vessel, or may have been left by 1960's salvage attempts.

"Though the Boaz was mapped in the 1988 survey, archeologists returned onJune 4,1991 for a brief inspection of the site, and to record further details of the vessel's midships framing pattern." Survey of Submerged Cultural Resources: Selected Sites in Lakes Michigan and Superior, David Cooper, John Jensen.