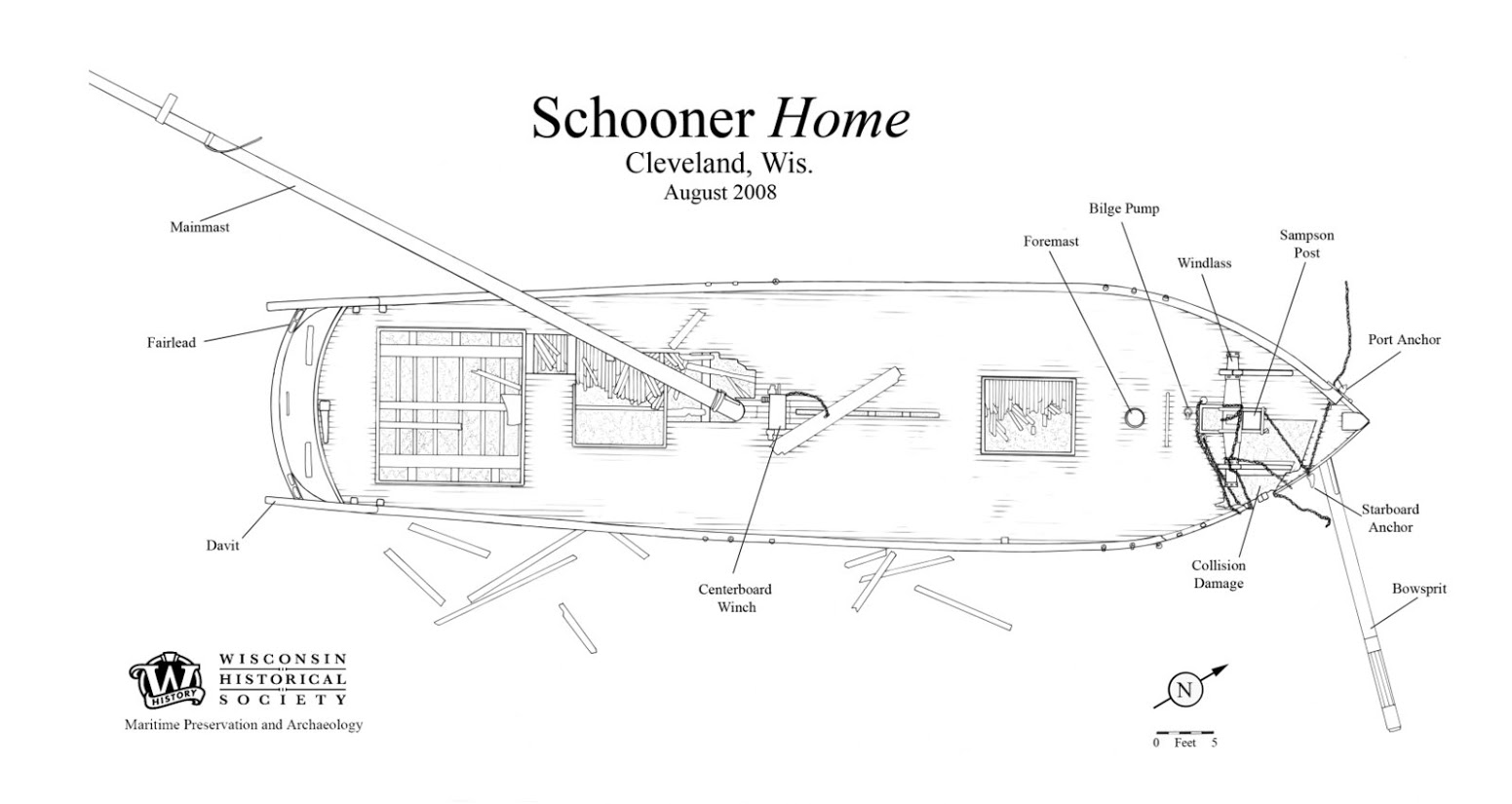 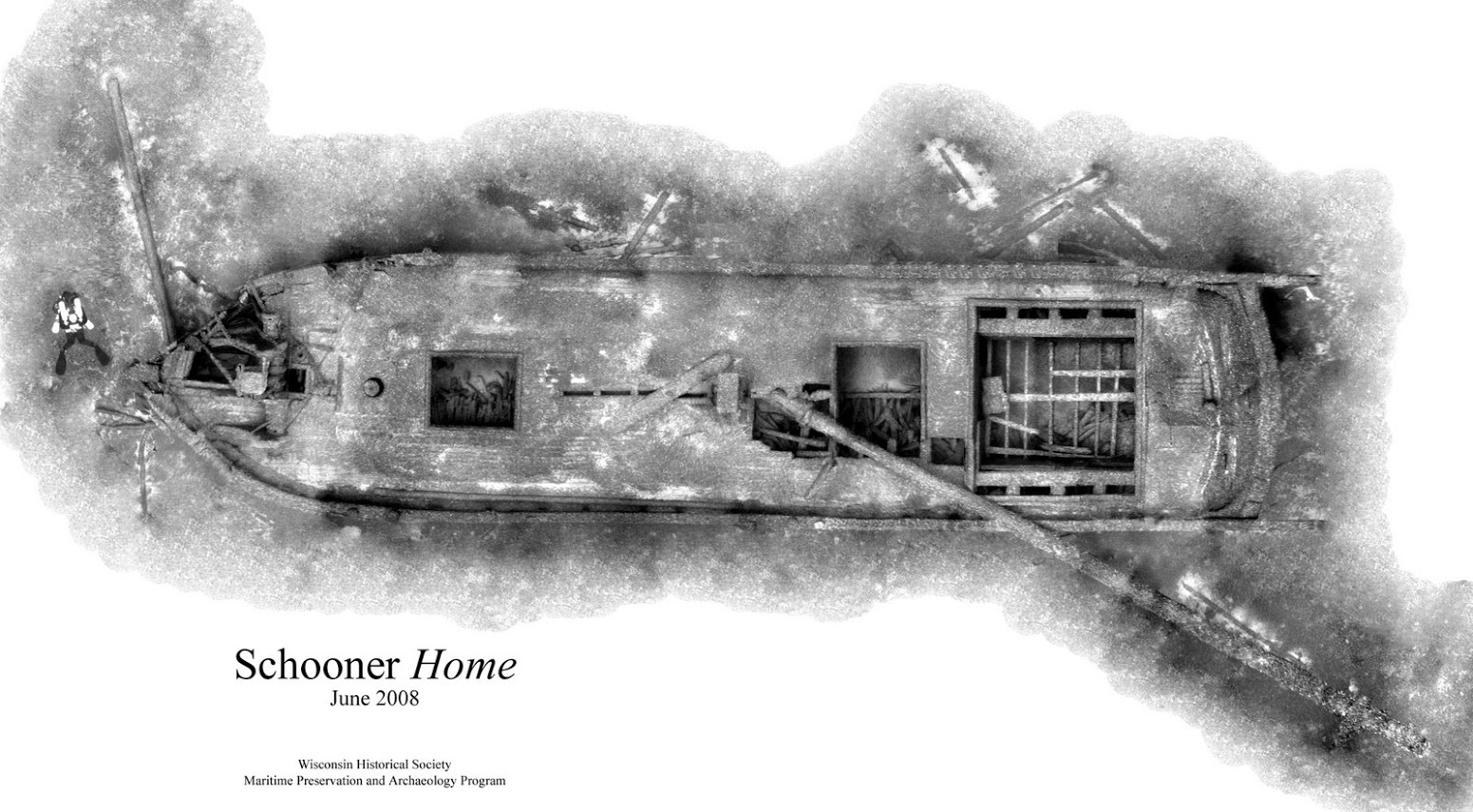 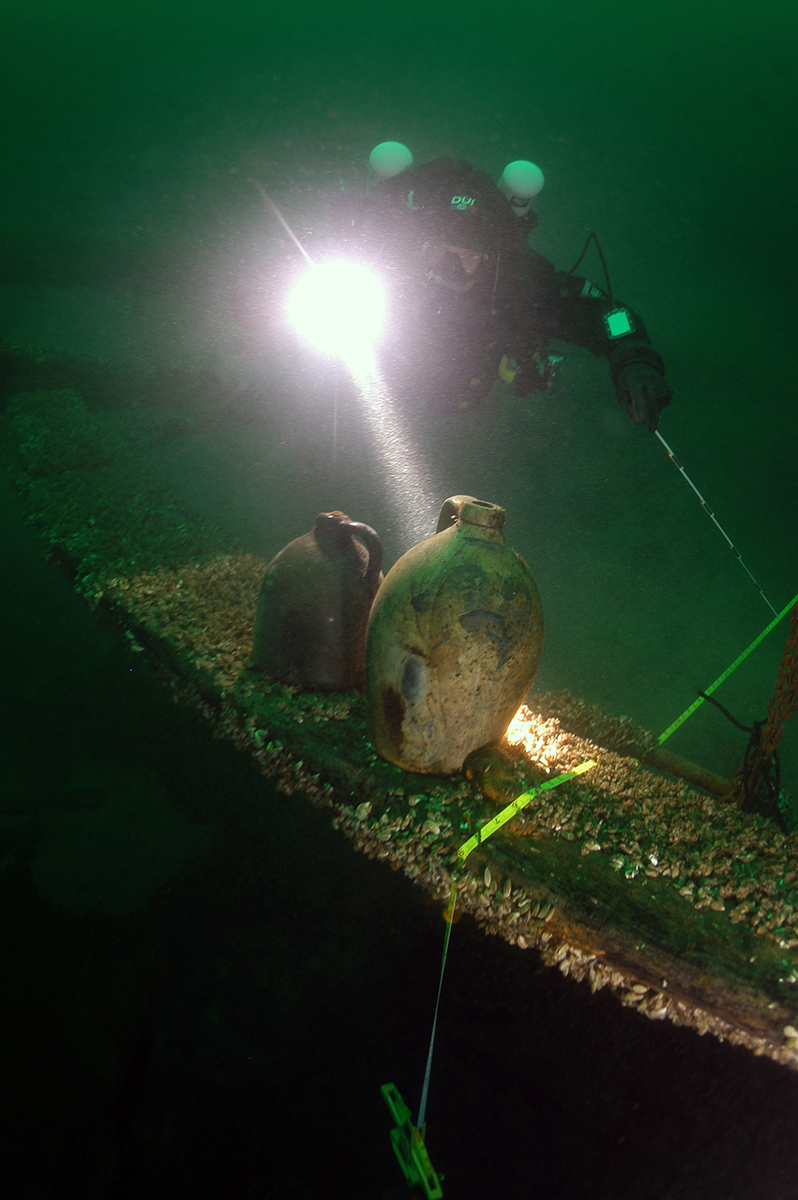 An archaeologist examines artifacts associated with the schooner Home site. 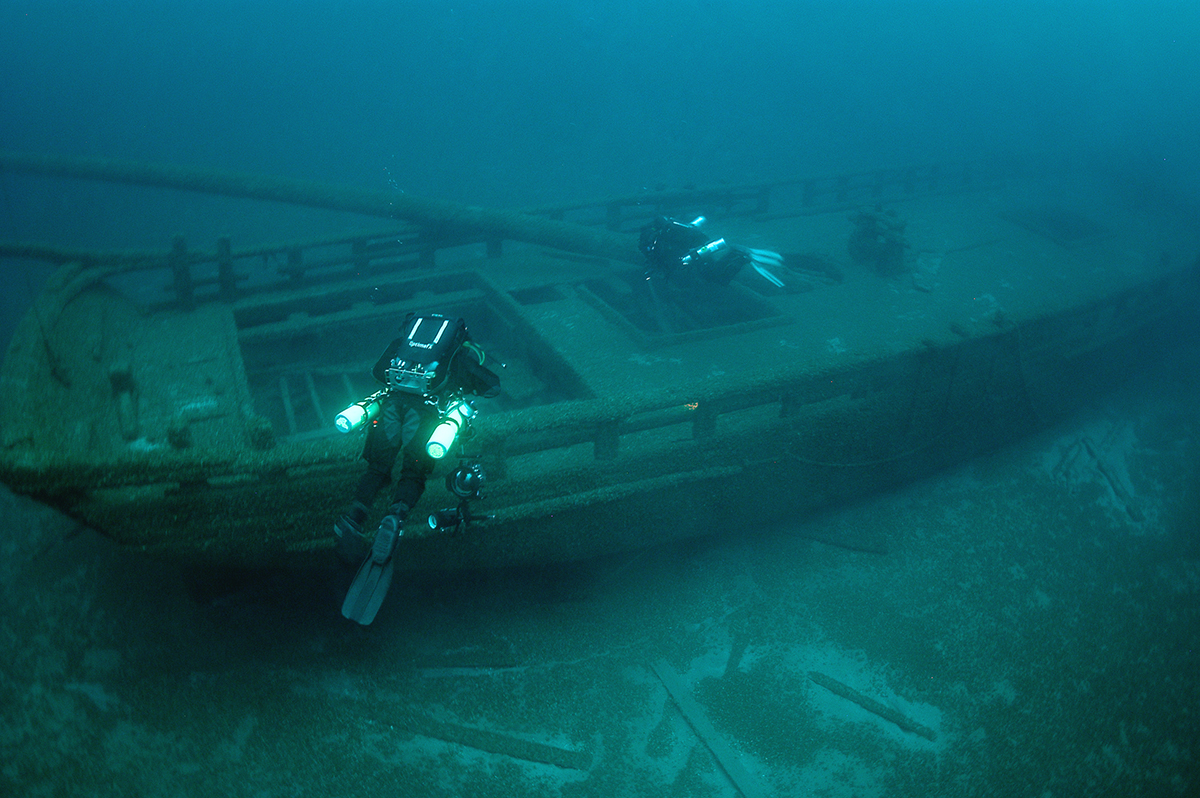 Divers swim over the schooner Home. 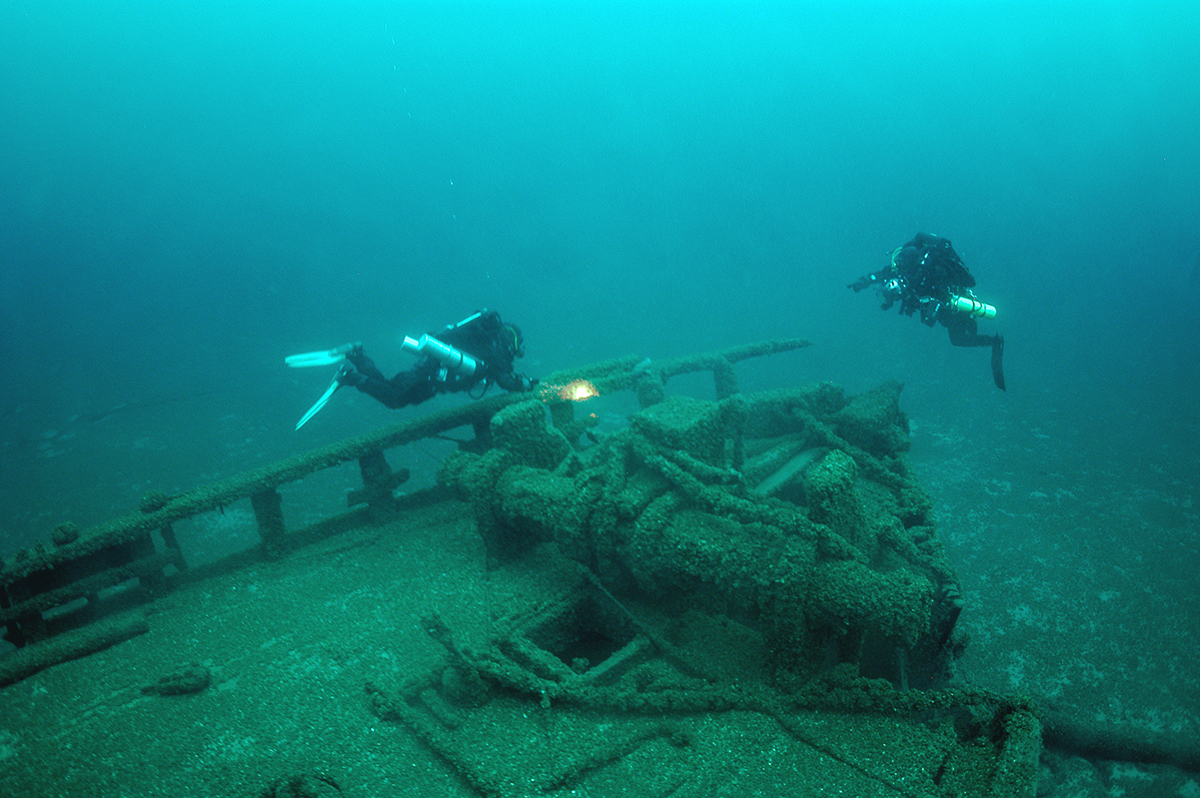 Divers swim at bow near windlass. Collision damage can be seen on the starboard side. 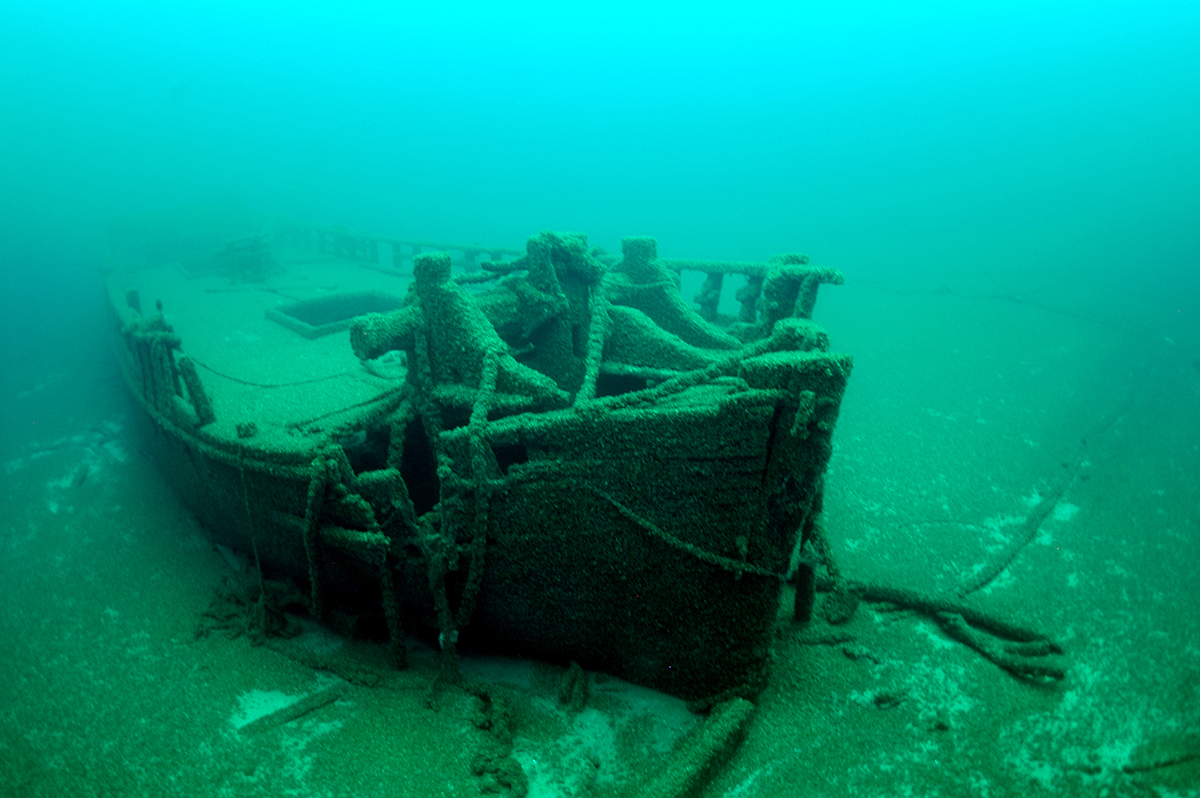 Bow of the Home with collision damage on the starboard side. 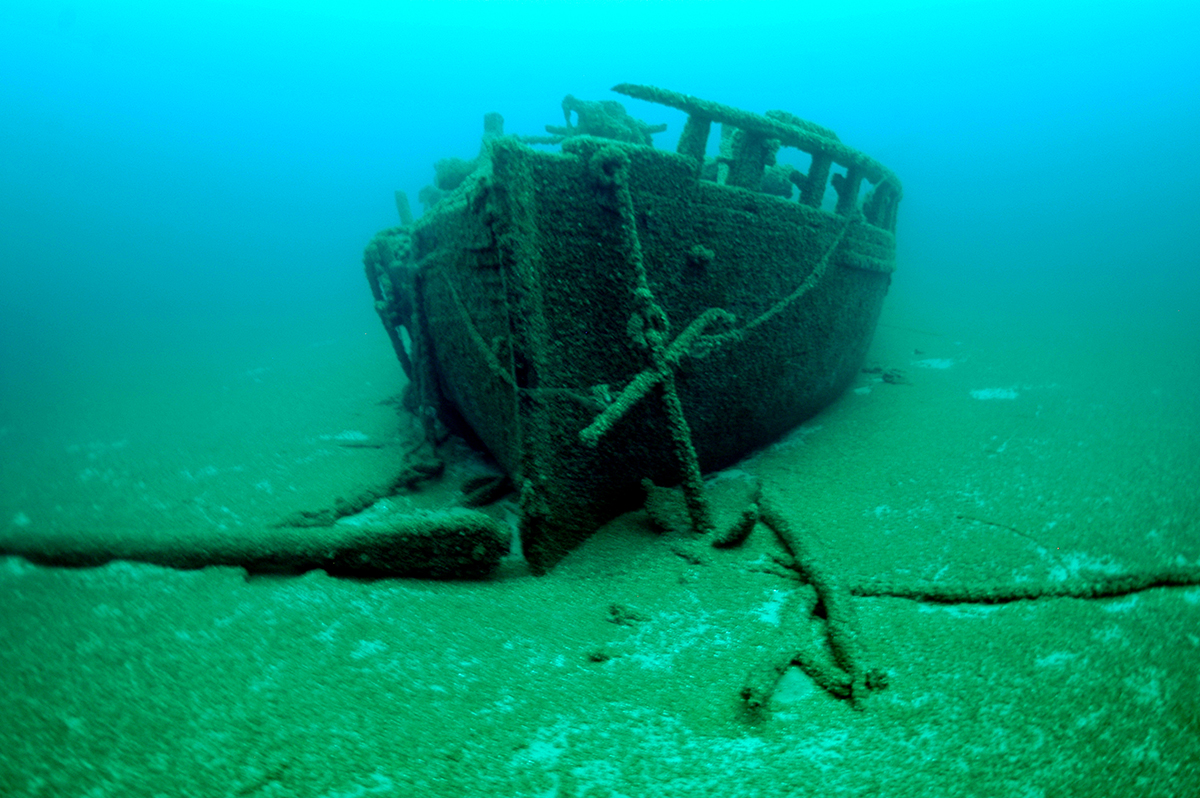 Bow of the Home. Port side anchor rests in the sand.
Deck view from stern.

The two-masted schooner Home was built to trade grain, lumber and general merchandise between ports on Lake Erie and the upper lakes. By the late 1840s Sandusky, Ohio became an important terminus on the Underground Railroad. The Home’s captain James Nugent was a known abolitionist and collaborator on the Underground Railroad. Additionally, many merchants that consigned shipments to the vessel were anti-slavery sympathizers. It’s difficult to confirm successful vessels associated with Underground Railroad – in other words, Home was likely used in some capacity but never caught with fugitive slaves aboard.
Final Voyage

On October 16, 1858, a cargo of merchandise, wood and cedar posts was loaded at Manitowoc bound for Chicago. At 4:00 AM the next morning, Home collided with the schooner William Fiske in a dense fog southeast of Manitowoc; the collision stove in the Home’s side and toppled her masts. The William Fiske was undamaged, laid by the damaged vessel, and took Captain White and the Home’s crew aboard around sunrise. Several newspapers erroneously reported the accident as taking place “Near the Manitou’s” and the wreck’s location remained lost until discovered April 1981 by Steve Radovan.
Today

The Home rests upright in 170 feet of water and her hull is largely intact. There is collision damage at the starboard bow and the stern cabin is missing. The foremast was pulled to the surface in commercial fishing nets and is now on display at the Rogers Street Fishing Village in Two Rivers, WI.
Map