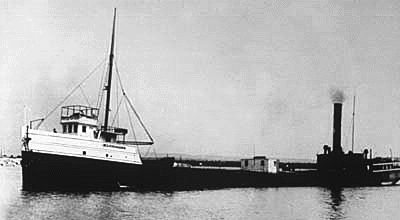 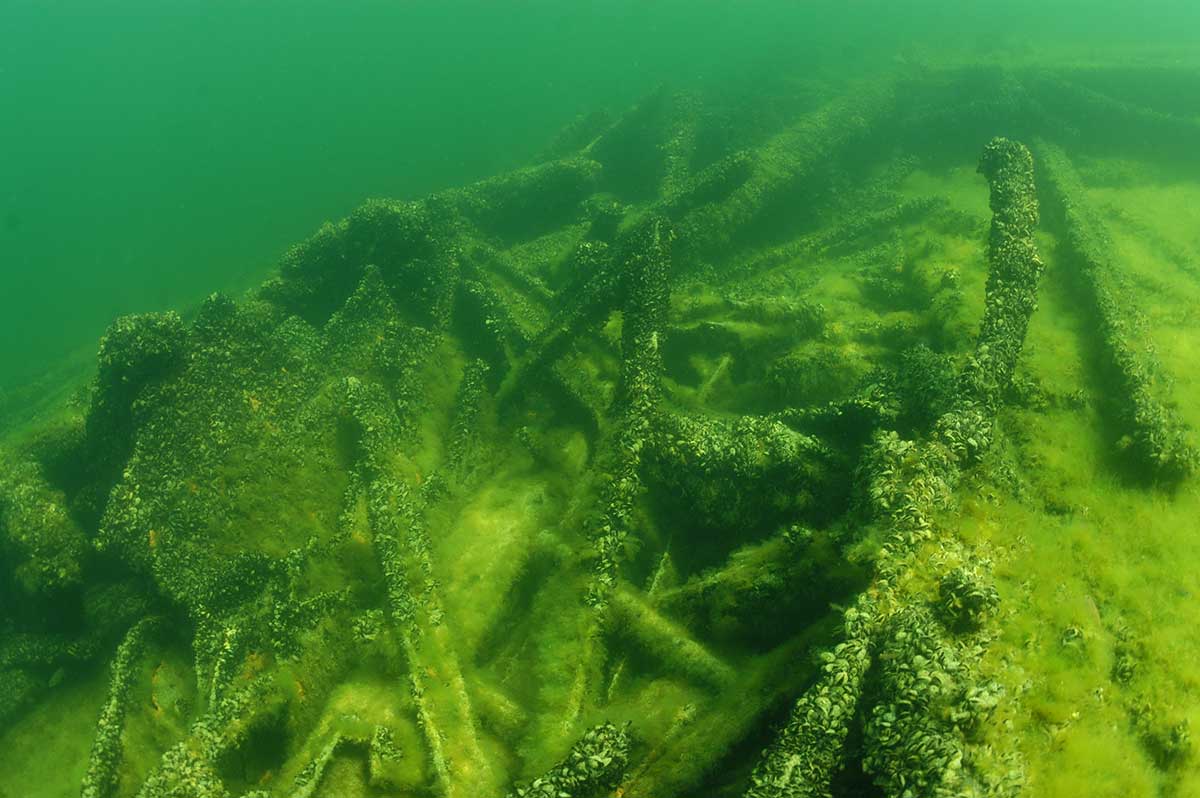 Broken planking and iron strapping on the Louisiana wreck site 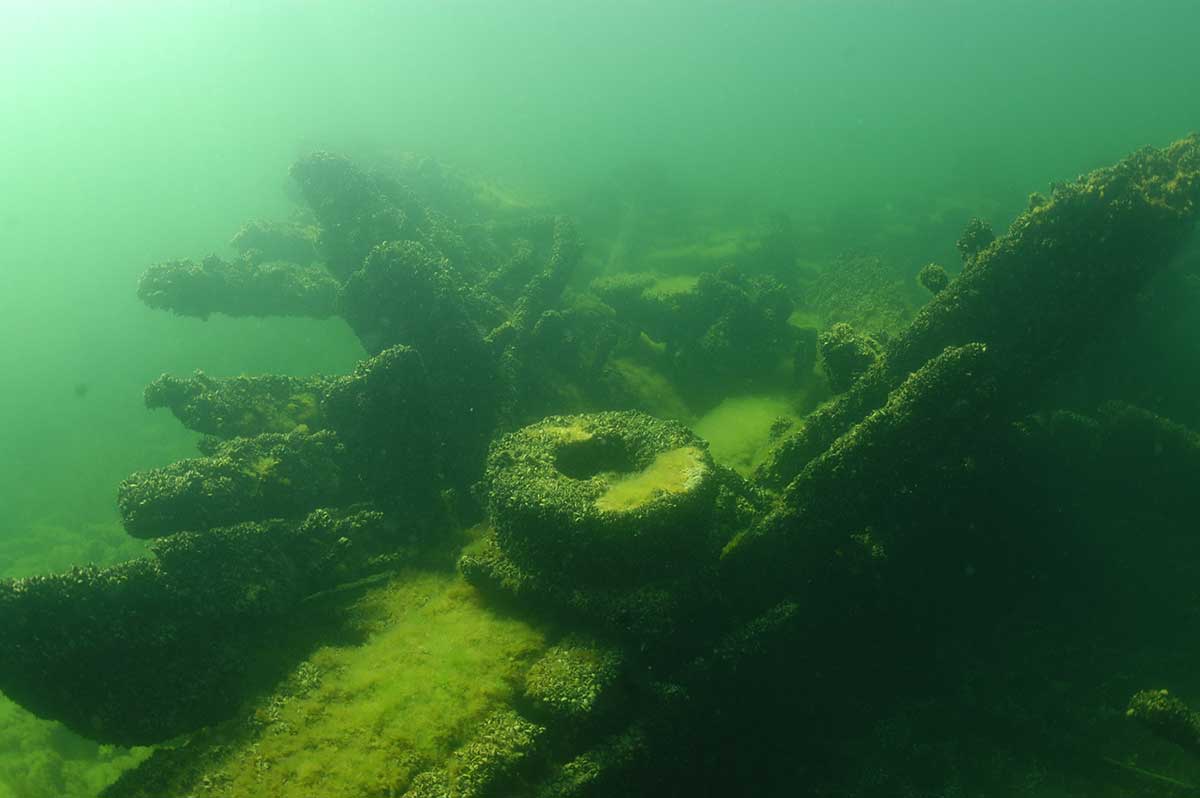 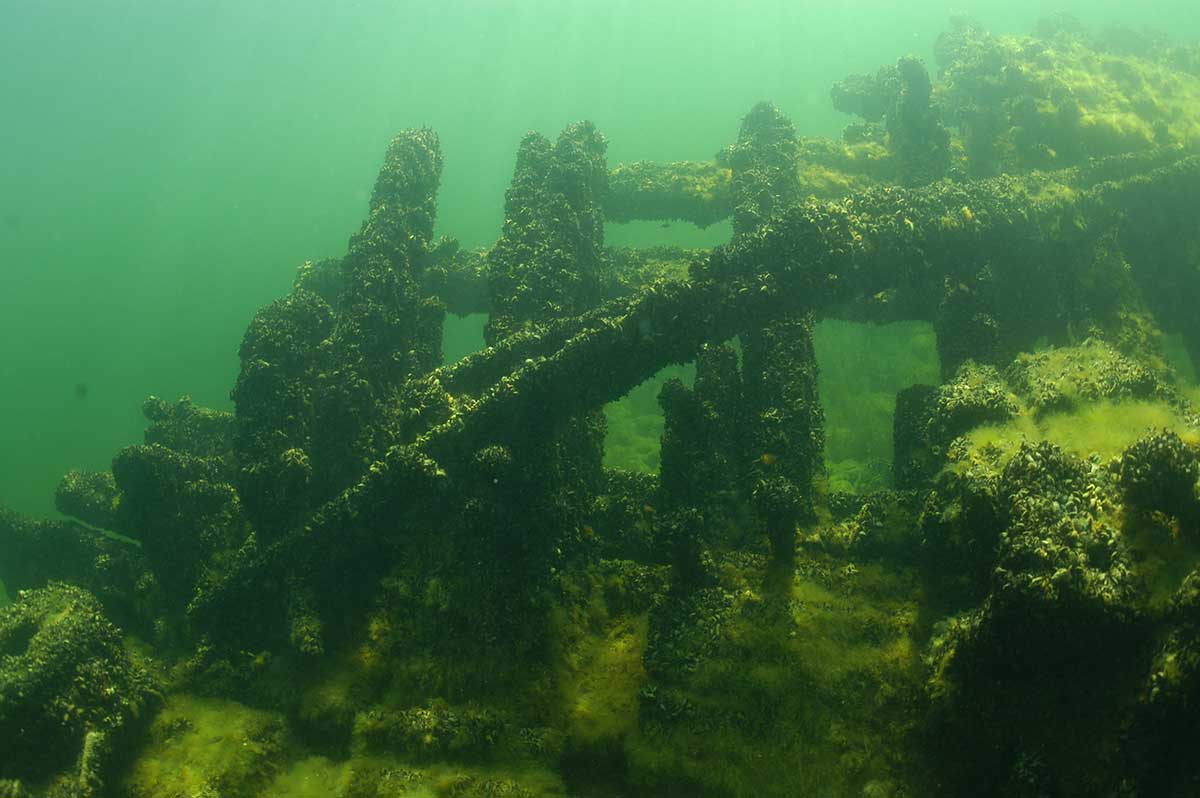 Frames and remains of the iron cross bracing on Louisiana 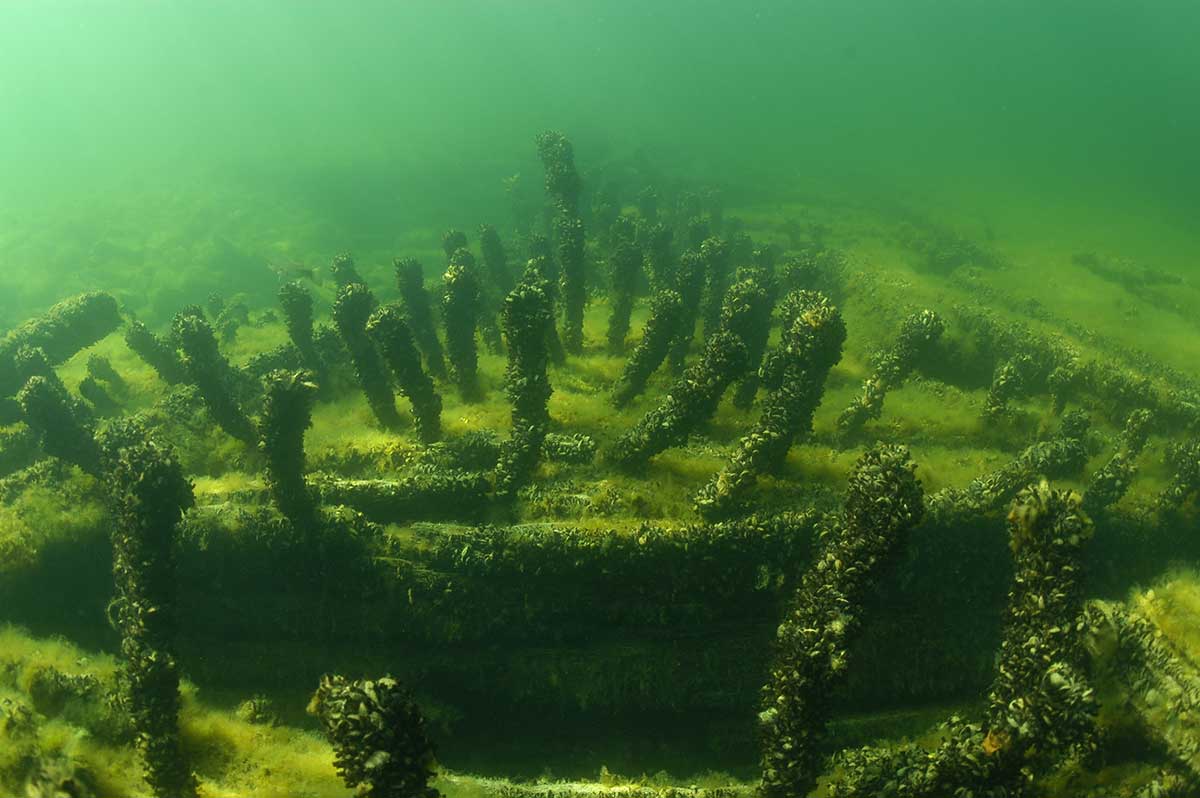 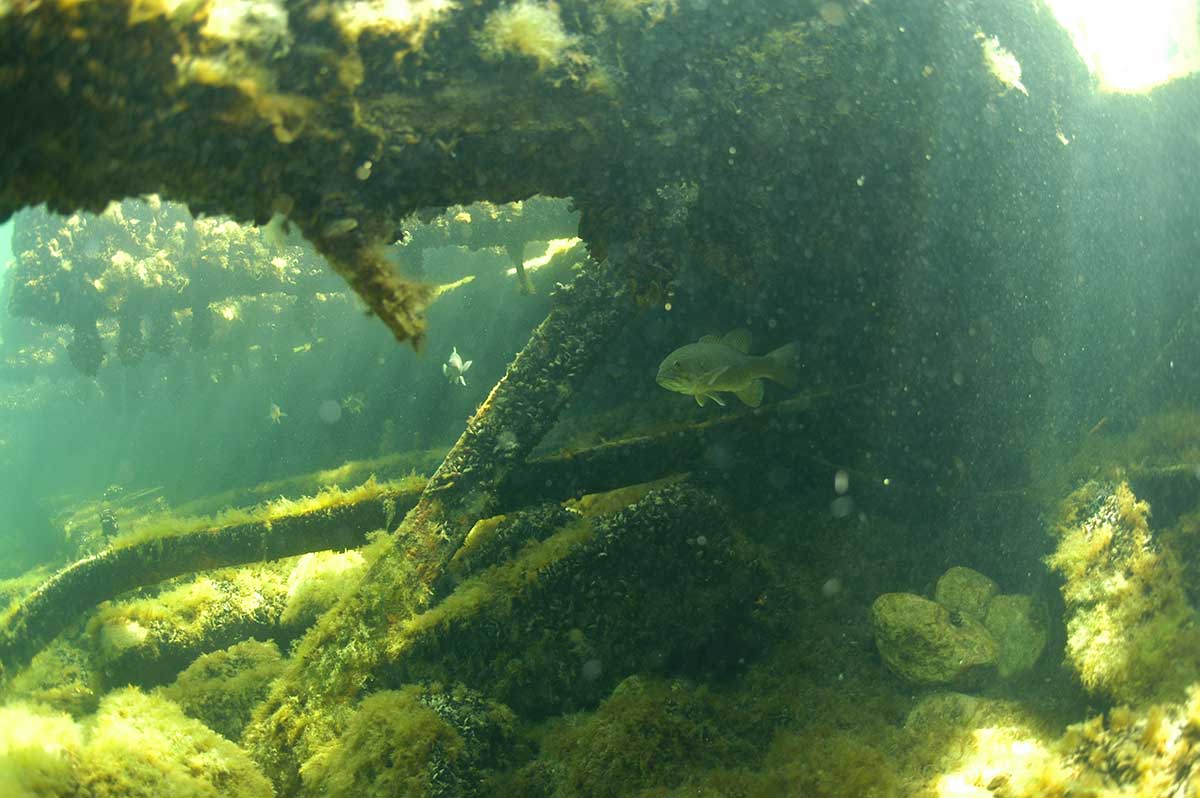 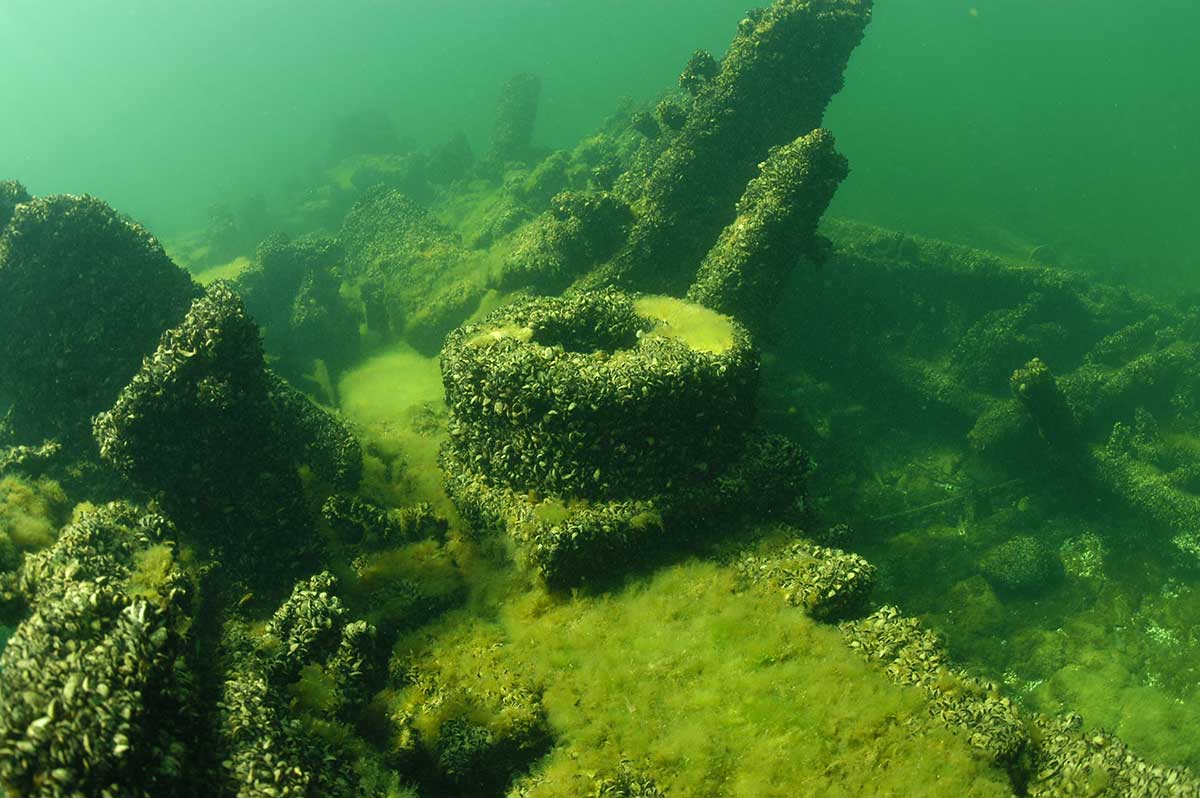 View of the starboard side of Louisiana's stern, looking forward 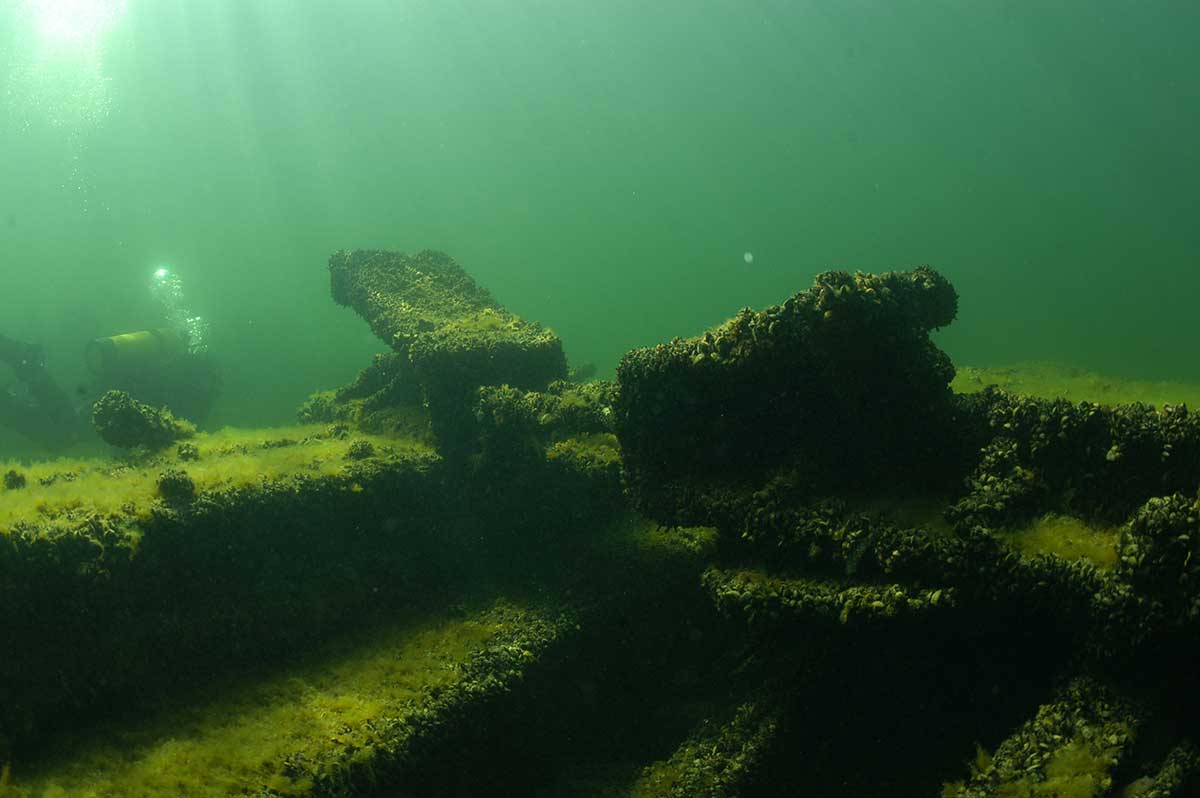 An archaeologist swims past the Louisiana's engine mount 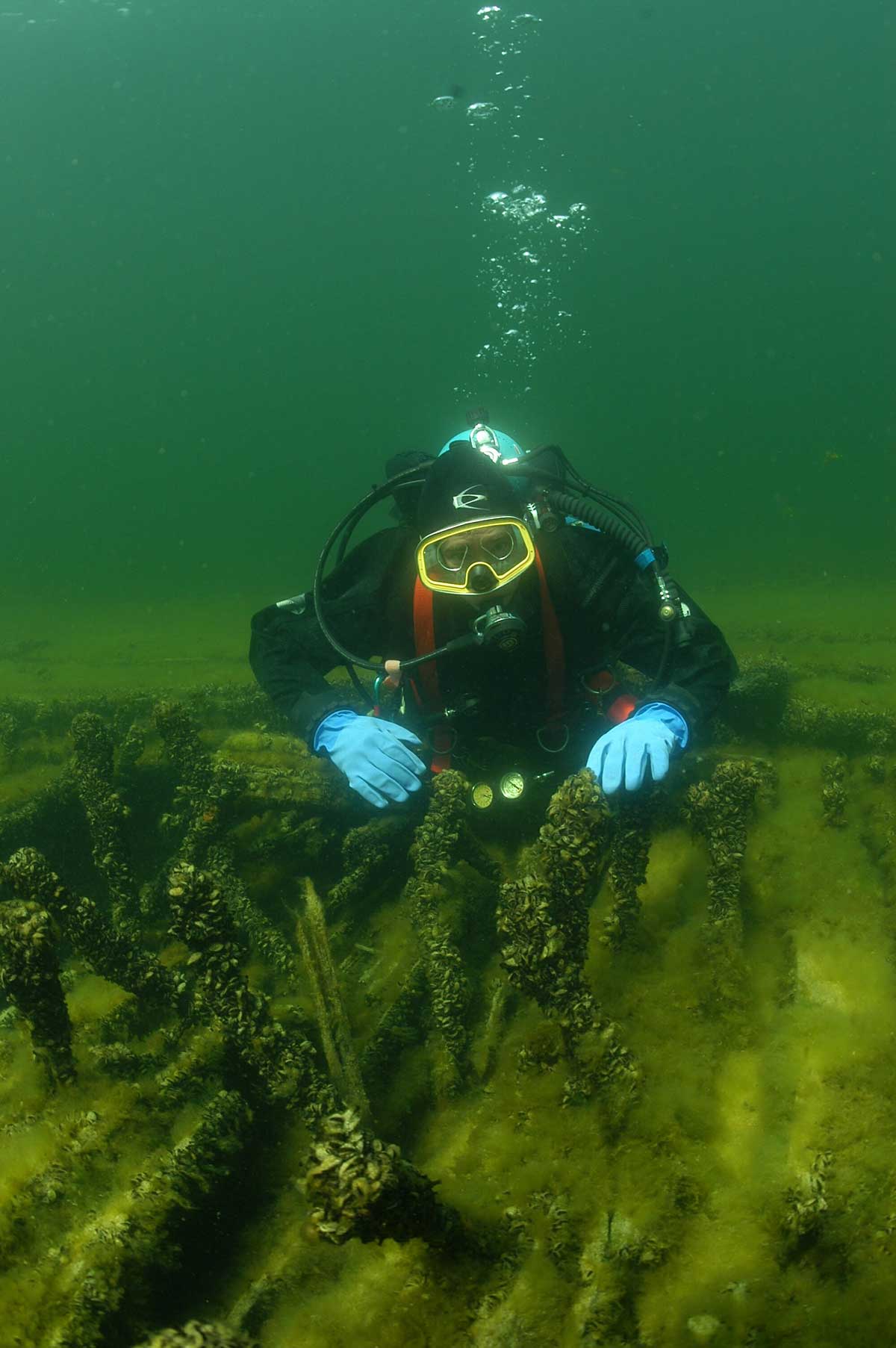 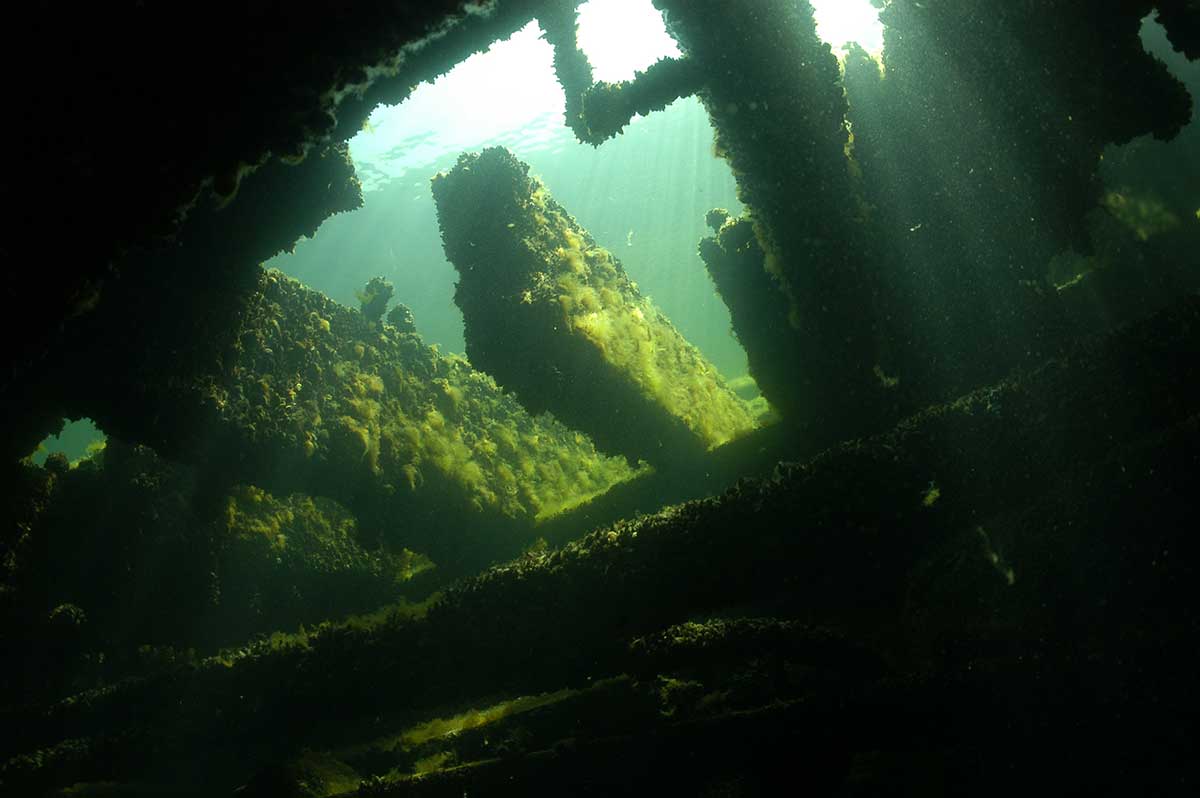 Looking up from below at the floors of Louisiana 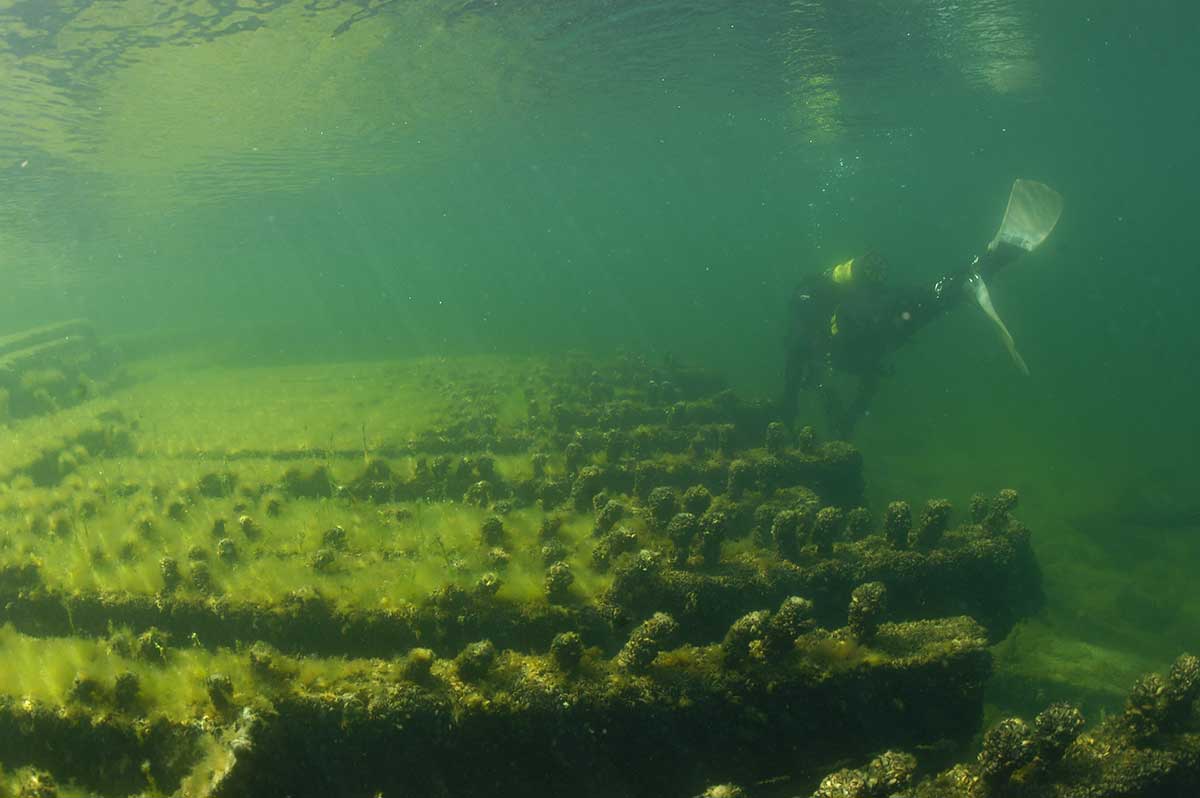 An archaeologist investigates the Louisiana's frames 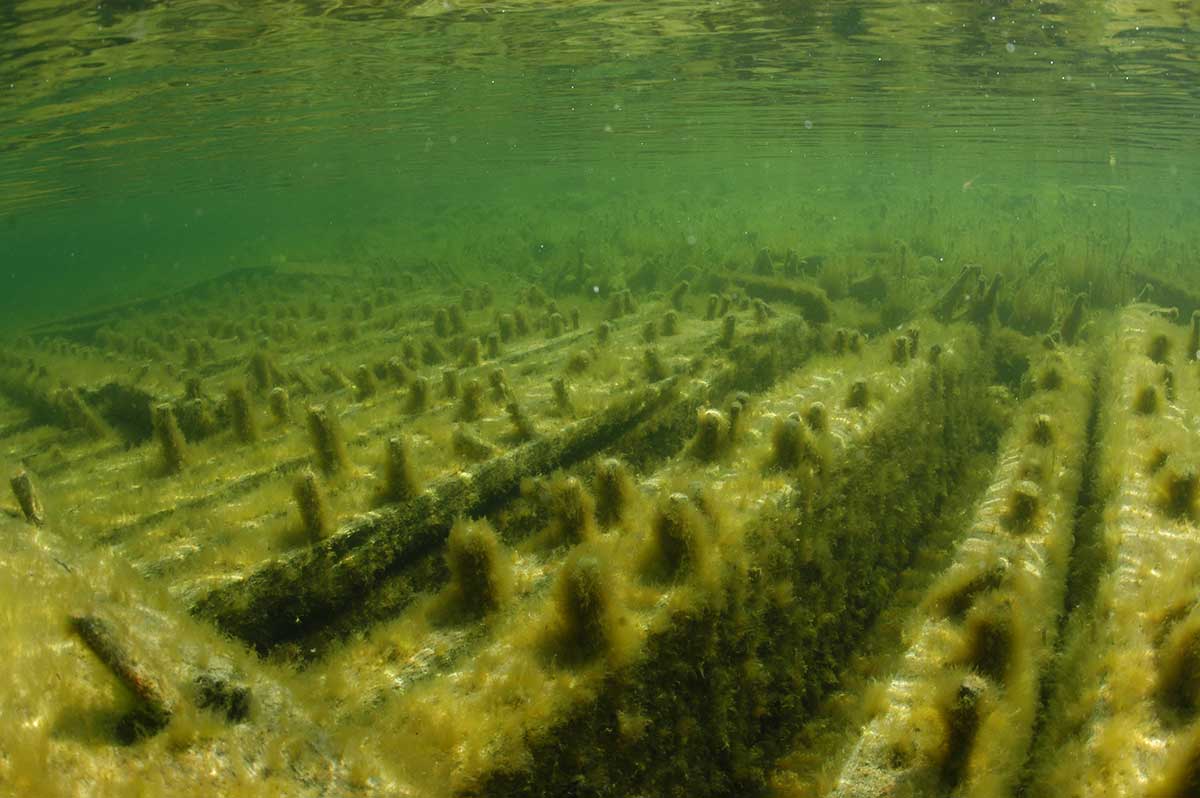 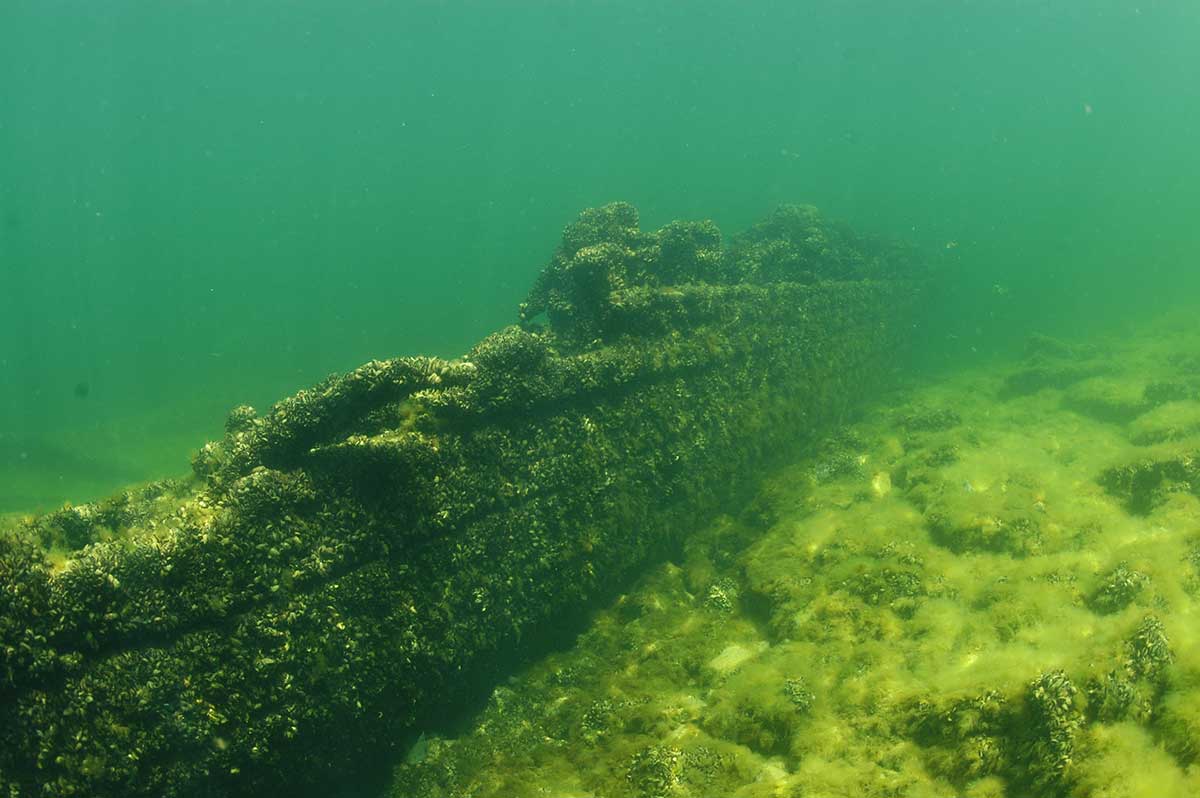 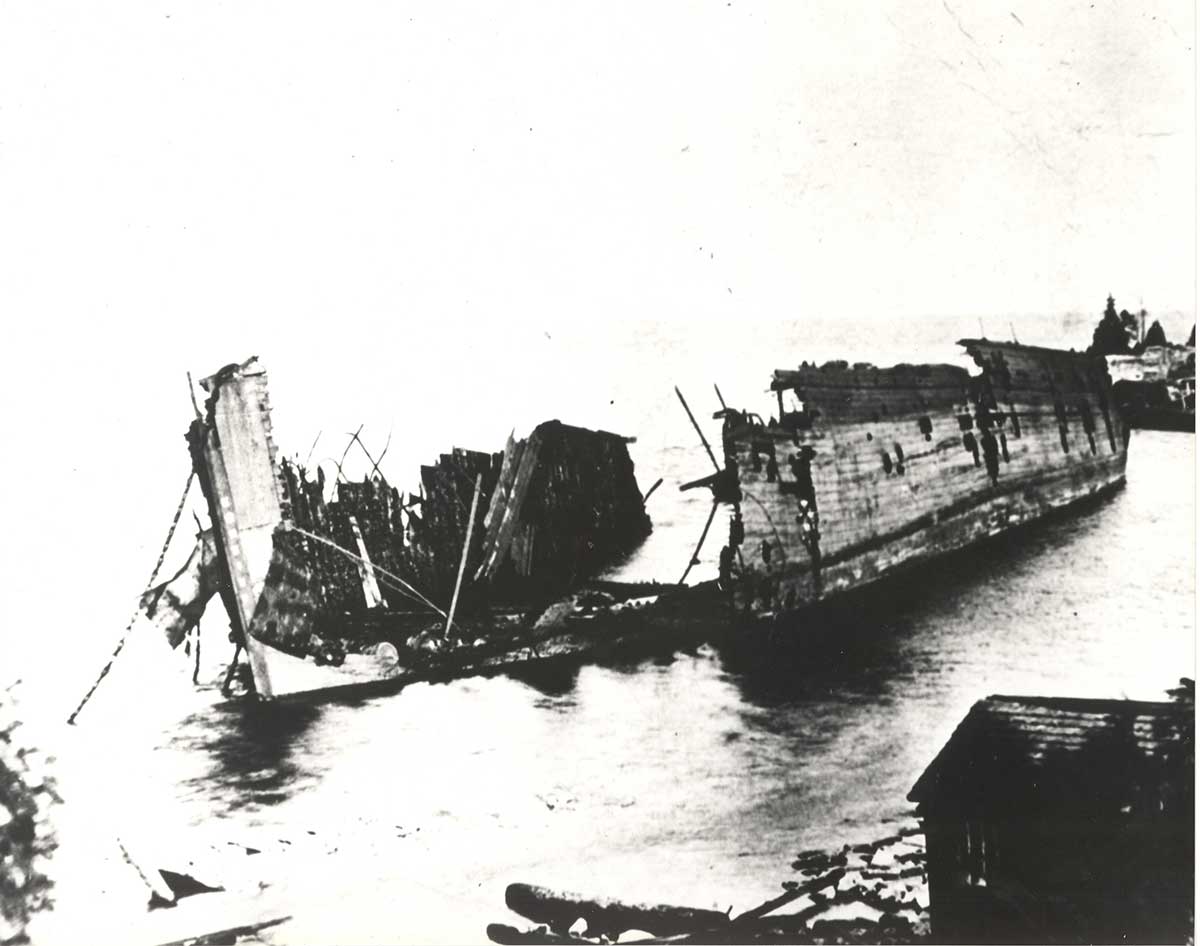 Historic image of Louisiana aground shortly after the vessel burned 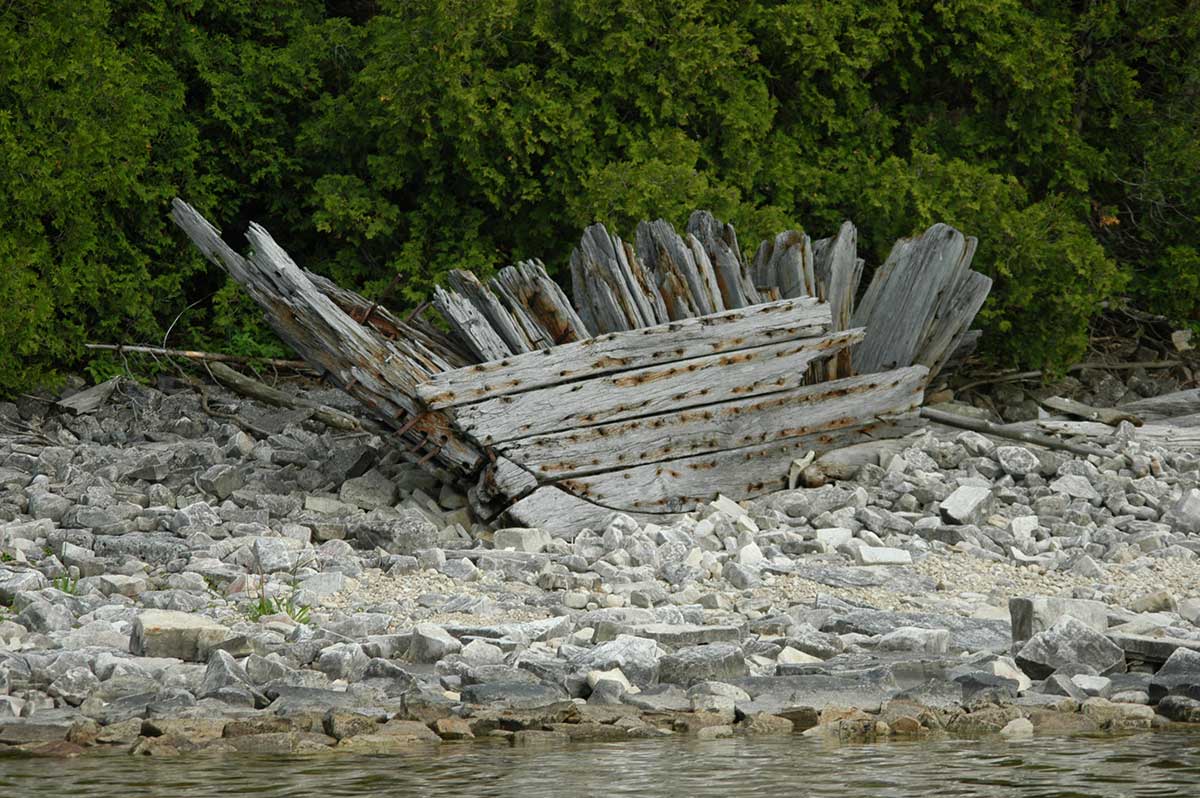 The wooden bulk freighter Louisiana was built at the Morley & Hill Shipyard in Marine City, Michigan in 1887 and launched on May 26,1887 near Belle River. The vessel had a two cylinder fore-and-aft compound steam engine and a single firebox boiler. Both the engine and boiler where built by Dry Dock Engine Works in Detroit. Originally the vessel had four masts, but later changed to two. Her official registry number was 140882.

The design of the Louisiana owes much to the innovative R.J. Hackett, the first Great Lakes vessel designed specifically to haul dry bulk cargoes of ore and grain below decks in a weathertight hold . Built in 1869, the 210-foot Hackett featured multiple large oak keelsons and new techniques of iron cross-bracing. These reinforcements made possible a large, uninterrupted hold that could be accessed with bulk unloading equipment. The Hackett's evenly-spaced hatches , designed to match the ore chutes of docks at Marquette, Michigan, allowed quick loading and unloading of an unprecedented 1,200 tons of ore.

Shipbuilders around the Great Lakes quickly adopted this efficient design. Over the next four years, 46 other wooden bulk carriers were constructed, becoming the forerunners of today's modern bulk carriers. Following the example first set by the steam barges of the day, the cargo space was freed up by moving the machinery aft and the pilothouse forward, which also greatly improved visibility. Powerful engines provided the main form of propulsion and allowed these ships to tow one or two barges , called consorts , that were as large as the steamers themselves. Auxiliary sails provided additional power and stabilization while underway. To maximize efficiency and competitiveness, these new wooden bulk carriers were built as large as technology and sailing conditions would allow.

The economic panic of 1873 brought shipbuilding to an abrupt halt and marked the end of the first generation of bulk carriers. By the time the industry revived in 1880, technological advances enabled ship builders to design the larger and more powerful second generation of bulk carriers. During the next decade, a remarkable 170 such vessels would be built on the Great Lakes, including the Louisiana..

Built in 1887 in Marine City, Michigan, at the yard of Morley and Hill, the Louisiana was 267 feet long with a beam of nearly 40 feet and a depth of hold of 20 feet. Seven hatchways provided access to the hold.

The Louisiana's power plant was built by Dry Dock Engine Works of Detroit. Her screw propeller was powered by a fore and aft compound steam engine that summoned 610 horsepower from two cylinders 26 and 48 inches in diameter with 40-inch strokes. A single firebox-type boiler, 10 feet in diameter and nearly 16 feet long, produced steam for the engine.

The Louisiana began her 26 th year of service in 1913. She was then owned by Frank M. Osborne, and her home port was Cleveland. Late that year she sailed into the worst storm in Great Lakes history.
Final Voyage

With Captain Fred McDonald in command, the Louisiana departed Lorain, Ohio, on November 2, 1913, loaded with coal and headed for Milwaukee. After delivering her cargo in Milwaukee, she departed light for Escanaba, Michigan, to pick up a load of iron ore. Around midnight of November 8, the ship passed through a channel between the Bay of Green Bay and Lake Michigan known as Death's Door.

A severe snowstorm greeted the Louisiana and her crew as they negotiated the rocky passage. With winds over 70 miles per hour, it whipped the waves into huge, crashing breakers. Captain McDonald sought refuge from the dangerous conditions in Washington Harbor on Washington Island, but the Louisiana's anchors could not hold in the heavy seas and howling wind. The fierce storm drove the ship aground, perilously close to the rocky southeast shore of Washington Harbor.

With the seas pounding on the rocks, the Louisiana's small lifeboat offered little chance of getting ashore safely. Rather than braving the heavy seas and surf in the tiny boat, the crew elected to ride out the storm aboard the grounded steamer. By morning, however, the grave situation had grown worse. The storm was still raging, the ship was still helplessly caught on the rocks, and the cargo hold was now ablaze in a fire the crew could not extinguish. Capt. McDonald and the desperate crew had little choice but to board the lifeboat and take their chances in the surf, leaving the Louisiana to suffer the ravages of the fire and the storm.

By this time, a lifesaving crew from Plum Island had hauled their life-saving equipment over land to the shore near the grounded ship. However, the breaking waves were too powerful, and the rescue team could offer no help to the men in the lifeboat. At the mercy of the elements, the men rowed toward shore, struggling to keep the small lifeboat from capsizing or crashing against the rocks. In the end, they were lucky. They made it through the powerful breakers and landed safely on shore.

Many others around the lakes were not so fortunate. The "Big Blow of 1913" blew for two more days, becoming one of the worst storms to hit the lakes in recorded history. The gale that destroyed the Louisiana also wrecked a reported 20 Great Lakes vessels, damaged 71 other ships, and drowned 248 sailors.

The boiler of the Louisiana was reportedly salvaged in May of 1920 by the Leathem Smith Company of Sturgeon Bay. In August, salvagers removed the engine, scattering mechanical debris that can still be seen today. It is not known if the propeller, propeller shaft, and rudder were removed at this time or later.

A large hole has been blasted through the hull in the port midships area, splintering the keelsons and removing a 15-foot section of floors, ceiling, and exterior planking. It is not known whether this is the result of salvage attempts shortly after the wreck, malicious vandalism, or an effort to remove protruding hull elements that presented a hazard to navigation.

Archaeological analysis of the wreck indicates that much of the upper hull survived the fire. It was probably ice or modern salvage that later reduced it to its present level.
Today

The remaining 240 feet of the bilge lie on a gradually sloping rocky bottom, flanked by charred and broken pieces of the vessel's sides, machinery, sheet metal, and fastenings. At the bow, the hull is broken off at the turn of the bilge, but in the stern it rises to a height of approximately 13 feet. A large debris field of the boat's fallen sides and machinery lies off the starboard quarter, and much of this material extends into deeper water to the northwest.

It is believed that additional parts of the hull, including portions of the upper sides, deck , and superstructure, remain to be found in deeper water to the west and northwest of the site.

The engine and boiler were salvaged in 1920, but many miscellaneous engineering components such as bearings, pipes, and sheet metal surround the iron engine mount and broken bases for the fore and aft cylinders in the stern. The mount consists of an iron base fastened to wooden supports. The broken base of the fore and aft cylinders are found to port of the engine mount. A 10-foot-long section of pipe from the steam-powered bilge pump is located to the port side of the stern keelson , running down into the bilge through the ceiling.

The Louisiana's hull displays many interesting construction features that shipbuilders used to strengthen wooden hulls. Iron cross-bracing, multiple keelsons, and double ceiling planking (longitudinally and athwartships ) can be readily seen. These features helped minimize hogging (bending down in the bow and stern) and sagging (bending down amidships) caused by the strains of heavy cargoes in long wooden hulls.

The longitudinal keelsons form two central slots, one located near the bow, and another towards the stern. These slots are very similar to schooner centerboardtrunks in construction, except for being covered at the bottom by the vessel's keel . Originally a centerboard trunk, the forward slot was boarded up and the centerboard removed at some point during the Louisiana's career. The stern slot may have been bracing for deck stanchions or a bulkhead to prevent cargoes from shifting.

The Louisiana's historical significance lies in the example she offers of second-generation wooden bulk carrier design and in her association with the local history surrounding the great gale of 1913.

The site of the Louisiana is a favorite of beginning and intermediate divers, attractive for its shallow depth, water clarity, large amount of structure, extensive fish population (primarily smallmouth bass), and protected location in Washington Harbor.

As with many other wrecks in the Great Lakes, zebra mussels have colonized the Louisiana. These prolific mollusks are very difficult to control, and further colonization appears inevitable.

You can learn more about the Louisiana's history and archeological findings in " Survey of Submerged Cultural Resources in Northern Door County," by David J. Cooper.