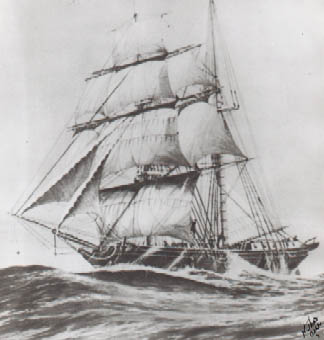 The wooden two masted brig Ramsey Crooks was built in 1836 at Black Water, Ohio for the American Fur Company. In 1863 she was valued at $800. and rated C2 by the Board of Lake Underwriters.

Up until 1842 when the American Fur Company went broke, the Ramsey Crooks ran between Detroit and the Sault in the fish and fur trade.

In 1848 she was in the grain trade sailing between Detroit and Buffalo. At Buffalo she collided with the barque Utica

On August 7, 1851 the brig capsized near Point Au Pelee. She was recovered and refitted. Property loss was $3,000.

October 1, 1855: Ramsey Crooks ran up on a rock reef near St. Helens Island. She was lighted and got off.

"The brig Ramsey Crooks was for a number of years the property of the late Capt. Nels. P. Nelson of Sturgeon Bay, who employed her in the square timber trade in the latter part of the fifties and early sixties. The Crooks is said to have been one of the ships built on Lake Erie at the time of Commodore Perry's victory over the British during the war of 1812. The government having no further use of her and other craft that had been built for the protection of the Great Lakes she with some of the discarded craft was bought by various shipmasters who early participated in the rapidly developing trade of Lake Michigan, to which she was brought by Capt. Nelson..." Door County Advocate 1/28/1909
Final Voyage

"...the old brig Ramsey Crooks...was lost on the east coast of Washington Island in the fall of 1863. The vessel was well known at this port along the latter part of the fifties and early in the sixties... In the fall of 1863 Capt. Knudson purchased a cargo of wood from And. Irr, of Washington Island, while bound south with a load of lumber from a west shore port. He started for the island pretty late in the fall, carrying some back freight. Among this was a barrel of whiskey, and Capt. Knudson says this was undoubtly (sic) the cause of the disaster which befel (sic) the vessel. Before commencing to take in a cargo the crew had tapped the barrel, and indulging pretty freely in the fiery stuff they became unmanagable. While in this helpless condition a storm arouse and the result was that the Crooks dragged anchor, struck bottom and went to pieces. On the day following the government steamer Search, which happened to be at Washington Harbor, went to the scene of the disaster and attempted to save what there was left of the brig, but everything about the hull was so old and rotten that nothing whatever could be done. So much for free whiskey." Door County Advocate 11/24/1888.
Nearby
View 4 more View fewer
^
© 2022 - Wisconsin Sea Grant, Wisconsin Historical Society