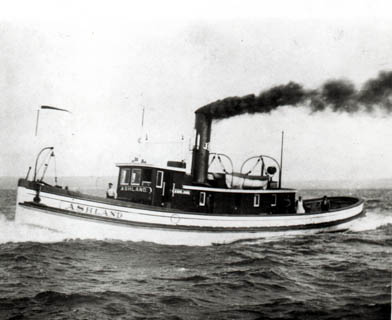 "The tug Ashland, formerly the A.C. Van Raalte, had a long career in the bay area (Red Cliff Bay, Schooner Bay). She was built in Buffalo, New York in 1867, and her final owner was the John Schroeder Lumber Company." The UnholyApostles, James M. Keller
Final Voyage

"The little steamer, Ashland was a victim of the depression and abandoned in the early 1930's.. She laid on the beach at Ashland for a short period of time, but was later salvaged and towed to Red Cliff Bay." The Ashland now rests in Red Cliff Bay. The Unholy apostles, James M. Keller
Map