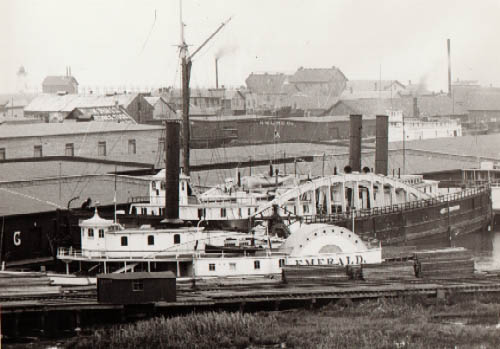 The sidewheel steampaddle Emerald was built in 1862 at Algomac, Michigan to be used as a packet steamer around the Great Lakes. The Emerald was brought to the Ashland area in the 1880's to tow logs from the north shore of Lake Superior and to carry excursionists around the Apostle Islands and between Ashland, Bayfield and Washburn.

Besides being an excursionist and packet steamer the Emerald was also known as a wrecking steamer; "In the spring of 1892 Mr. McAfee was appointed chief engineer of the side-wheel steamer Emerald of Ashland, in the excursion business. She carried a wrecking outfit and was also engaged in trying to locate the wreck of the Pewaubic..." History Of The Great Lakes, page 1143. Besides locating the wreck of the Pewaubic and sending a diver down on her (who later died on the wreck), "the Emerald was chartered to raise the sunken ore steamer Lucerne, which lies in 20 feet of water near Madeline Island, 20 miles from Ashland..." Buffalo Enquirer July 11, 1892.
Note: The well known three masted schooner (not steamer) Lucerne is located on the northeast side of Long Island near Ashland in 24 feet of water and the hull is still pretty much intact and a well known dive site.
Final Voyage