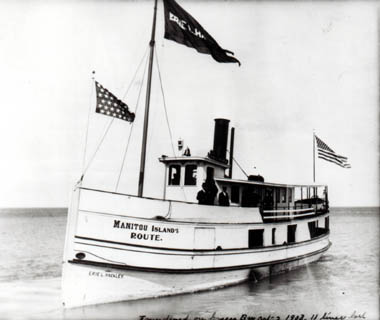 The Erie L. Hackley was a wooden steam screw vessel built in 1882 at the Boon Company Dock in Muskegon, Michigan by C.H. Hackley in honor of his daughter. The vessel was not particularly large, 78 feet long with a 17.4 foot beam, and was powered by a 200 horsepower steam engine. The Eiri L. Hackley spent her early years carrying passengers and freight around the Muskegon area as part of the North Muskegon Ferry Line. In 1888 the ship was rebuilt including replacing the boilers. In 1898 she moved northward to carry mail and passengers between Charlevoix, Michigan and Beaver Island (an island in upper Lake Michigan). To make her more seaworthy on the open waters, the Erie L. Hackley was rebuilt with high forward bulwarks and a raised pilothouse. The Hackley sailed the Manitou Islands route for the 1902 season. In 1903, the newly formed Fish Creek transportation Company purchased the Erie L. Hackley to serve its Green Bay route.
Final Voyage

On October 3,1903, the Erie L. Hackley departed Menominee, Michigan around 5:45 p.m., with nineteen people aboard, bound for Egg Harbor (west side of Door County peninsula) across the bay. About an hour later, a violent squall arose, whipping the waves to monstrous heights. Soon, great walls of water crashed onto the vessel, tearing the pilothouse and cabin from the hull. The waves swept the passengers and crew overboard before they could grab life preservers. The Erie L. Hackley sank in five minutes, leaving a trail of people and debris floating in the seething waters. Several castaways managed to climb aboard the floating cabin. They remained there through the night, occasionally being swept into the raging seas. The following morning, they were spotted by the passing steamer Sheboygan. The steamer's crew picked them up and found several others in the surrounding waters. They clothed and fed the survivors before transferring them to a passing fishing boat bound for Fish Creek, Wisconsin. Only eight of the nineteen people survived.
Today

The Erie L.Hackley was discovered 2 miles northeast of Green Island (located in Green Bay) in late 1979. The M/V/ Southern Marine was crossing Green Bay from Egg Harbor to Menominee and had left the the scanning sonar operating even though no formal survey was underway. In the vicinity where the Erie L. Hackley was known to be lost the sonar registered a target. The following Memorial Day weekend, using sonar the wreck of the Hackley was rediscovered by divers who were purposely looking for the lost vessel.

Frank Hoffman from the Mystery Ship Seaport and other divers explored and systematically salvaged the wreck. In late 1981, Hoffmann's crew then decided to attempt to raise the wreck. Plans were to display the Hackley along with the Alvin Clark at the Mystery Ship Seaport Museum at Menominee. During August and September, cables were dredged under the hull and made ready for the lift. Normally before raising a wreck, most of the mud enveloping the hull is jetted away to reduce suction. Because of the deteriorating fall weather, the raising of the Hackley was attempted without the massive mud jetting. The suction of the mud refused to release the ship and the cables pulled free bringing only the ship's rudder and a 38 foot section of rail to the surface. Today, the Erie L. Hackley lies in 110 feet of water, two miles northeast of Green Island. She sits upright and is mostly intact. In place are her engine, boiler, the cargo of red bricks, some decking as well as her sides and bow. Her stern has been damaged.
Map