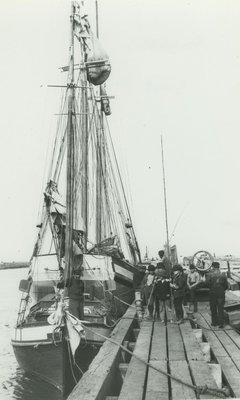 The scow schooner Augustus had been owned and sailed for years by the well-known Captain Arthur Dow of Manitowoc, Wisconsin, but belonged to Charles F. Larson of Marinette, Wisconsin, and Captain George Cota of Menominee, Michigan. At the time of her demise, Captain Cota was the ship's master.
Final Voyage

"Fire, said to have started from the cook stove in the cabin of the schooner Augustus early Sunday morning, completely destroyed the craft and her cargo. The boat was lying at the dock at Red River, about eight miles south of Little Sturgeon, Wis., where she had loaded hay, the same having been bought from William Barrett of Red River and consigned to the Marinette Flour and Feed Co. She had finished loading and was to leave at daylight of the following morning." Door County Advocate 11/29/1918 p.6 c.3

No one was aboard the Augustus at the time of the fire. Unfortunately, the only insurance collected was $200 for a shoreline warehouse nearby which was had sustained $500 damaged by the blaze. The Augustus was valued at $800 ant her cargo was worth $1,700.
Nearby
View fewer
^
© 2022 - Wisconsin Sea Grant, Wisconsin Historical Society