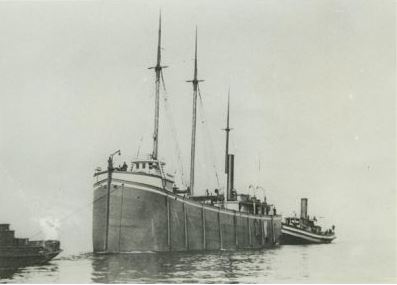 The wooden three masted steamer Nevada was built in 1882 at Bay City, Michigan by William Crosthwaite for John Kelderhouse of Buffalo, N.Y. Her official registry number was 130218. At the time of loss she was valued at $55,000 and insured by Smith, Davis and Company out of Buffalo for $40,000. The Nevada was a frequent trader into Milwaukee with coal in the 1880's and 1890's. "The Nevada was an unlucky craft and it is doubtful if she ever made any money for her owners." Kewaunee Enterprise November 21,1890.

May 1887: With a load of ore the Nevada collided with the schooner C.A. King at aux Galet, Lake Michigan.

June 1887: While loaded with coal she had boiler problems and was towed by the schooner John Breden for repairs.

1889: She was laid up at West Yard, Milwaukee for a month or two after a rebuild.

June 1890: with a cargo of coal she lost her shoe and rudder and stranded on Pilot Island and was released by the tugs Monarch and Favorite. She was towed into Manitowoc by the tug Arctic and steered by the Monarch. Repaired at Manitowoc.

"November 15,1890. The steamer Nevada sprung a leak Friday night. The steamer Manchester came alongside and towed her for two hours. The Nevada was dropped astern when there was ten feet of water in the hold, became unmanageable, and was abandoned by the Manchester at 3:00 Saturday morning. Her cargo of 1,040 tons of bituminous coal was "consigned to Reiss and Co., of Sheboygan, and shipped by the Columbus and Hocking Valley Coal Company, of Cleveland. The cargo was covered by insurance." Milwaukee Sentinel 11/18/1890.

"CHARGED WITH FOUNDERING THE NEVADA. Duluth, Minn. Nov. 15 - John A. Schurg, engineer on the steamer Marina, was arrested at Two Harbors yesterday. He is charged with willfully casting away the steamship Nevada by opening her sea cock and pumping her full of water when he was her engineer, Nov. 14, 1890. He was indicted by the Grand Jury in Chicago. The owner of the Nevada got $40,000 insurance money, and Schurg is said to have received $1,000 for the job." Buffalo Evening News November 15, 1893.

"The case was later dropped at the discretion of the U.S. district attorney because the witnesses were too scattered and so much time elapsed since the incident occurred that he felt it would be impossible to secure a conviction" Wild Gales and Tattered Sails, Paul Creviere, Jr.
Today

The vessel lies in deep water.