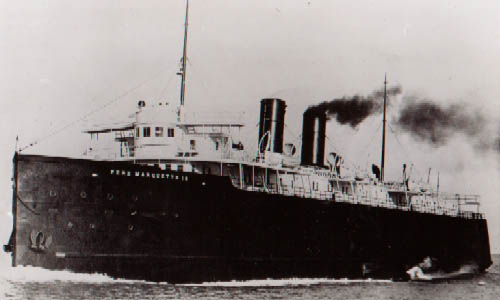 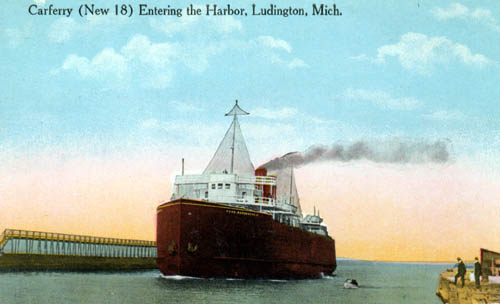 The steel cross-lake carferry Pere Marquette 18 was launched on August 16,1902. She was built by the American Ship Building Company, Cleveland, Ohio for the Pere Marquette Railroad to be used for cross-lake service between Ludington, Michigan and Kewaunee, Manitowoc and Milwaukee. Power was provided to her twin screws by two triple expansion steam engines. She had four railroad tracks on her main deck and she could carry up to 30 railroad cars. The Pere Marquette had 50 staterooms for passengers.

September 9, 1910: Enroute from Ludington to Milwaukee with a cargo of 29 railroad cars and 62 passengers and crew, the Pere Marquette 18 began taking water in the compartment housing the main propeller shafts underneath the "flicker" (crew's quarters). With the flicker flooding and more water entering through the portholes, the pumps were unable to keep the stern from settling deeper into Lake Michigan. The vessel's course was altered for the west shore, the crew and passengers were alerted and the radio operator sent out a distress signal. Thirteen railroad cars were jettisoned, and three lifeboats were launched when the Pere Marquette 17 arrived on the scene to provide assistance. Just as #17 arrived, #18 sank stern first, taking 27 lives. 35 people were rescued by the Pere marquette 17.
The flooding and loss of the 18 is still unexplained mainly because no officer survived the disaster to recount what had happened prior to the sinking to cause all the water to enter the after hold.
Nearby
View 3 more View fewer
^
© 2022 - Wisconsin Sea Grant, Wisconsin Historical Society