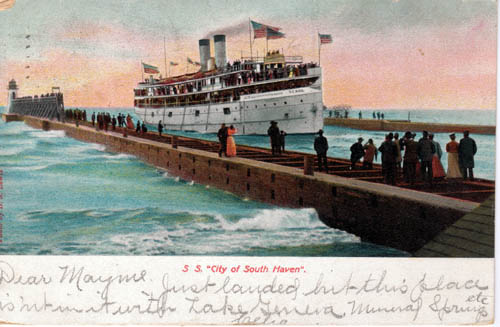 The E.G. Crosby was built as the City Of South Haven in 1903 as a steel hulled, oil burning, steam driven propeller. The vessel was built at Toledo, Ohio by the Craig Shipbuilding Company.

"The E.G. Crosby had an interesting career that began under the name City Of South Haven as a luxury passenger steamer running between Chicago and South Haven. Her original owners had her built to rival the ill-fated steamer Eastland which later capsized in Chicago. The South Haven was later renamed E.G. Crosby in memory of Great Lakes ship captain Edward G. Crosby, who as a passenger, was lost with the luxary liner Titanic in 1912. During the prohiition era, the Crosby was renamed City of Miami and taken to the east coast where she ran between Miami and Havana, Cuba as a floating tavern. Later, she was returned to service on Lake Michigan under her former name of E.G. Crosby. She had most recently been purchased by Roen and Wolter of Sturgeon Bay for conversion to a barge." Wild Gales and Tattered Sails, Paul J. Creviere, Jr.
Final Voyage

December 3, 1935: The E.G. Crosby was an old steel hulled steam propeller that was being cut down for use as a barge at the Sturgeon Bay Shipbuild and Drydock Company. A welding tourch had started a fire which spread uncontrolled to six other vessels. The tug Beaver, the schooner Lucia A. Simpson and the two steamers Swift and Petosky were completely destroyed and the two steamers Waukegan and Kenosha were burned but later repaired and returned to service.

The E.G.Crosby may have been later cut up for scrap metal.

Note: The steel steamer Wisconsin (a popular dive site) was at one time also known as the E.G.Crosby but is not to be confused with this vessel.
Map