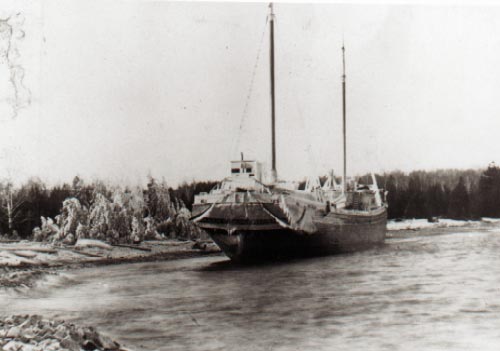 The schooner Halsted, known for her longevity with nearly sixty years of service, had various owners and a number of incidents including a few strandings and collisions. The three masted schooner was built in 1873 by Thomas Spear and his two sons George and Marshall at the shipbuilding plant and sawmill located at Little Sturgeon Bay in Door County, Wisconsin. In 1874 the Halsted was valued at $35,000 and rated A1. The official number was 95260. In her later life she was converted into a stone barge by Leathem & Smith.

October 1874: Collided with the schooner City Of Painsville near Astabula, Ohio. Towed to Cleveland for repairs.

November 1887: While loaded with coal, was grounded on a bar 19 miles from Chicago, Illinois.

November 1906: While docked at Dunkirk, New York, storm waves caused the Halsted to seriously bump the dock and other vessels causing significant damage.

November 1913: During a big blow, while being towed by the steamer James H. Prentice, the Halsted foundered on a rocky shelf not far from Washington Harbor on Washington Island, Door County.

Spring 1914: The vessel was towed off the beach at Washington Island, taken to the shipyards, repaired and put back into service.

The old schooner Halsted received a temporary reprieve when acquired by Leathem and Smith of Sturgeon Bay for use as a stone barge, but was abandoned in 1930. Finally, the abandoned vessel was towed to the boneyard at Sturgeon Bay in 1933 after 57 years of service on the Great lakes.

The Last Document Of Enrollment of the schooner-barge Halsted was surrendered at Cleveland , Ohio on December 29, 1930; cause of surrender--abandoned, sold for junk.
Map