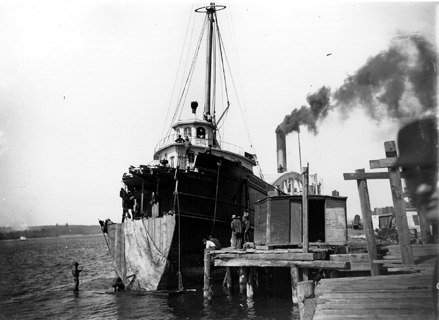 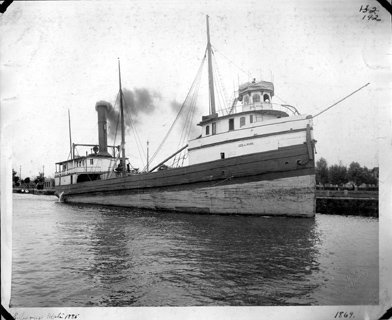 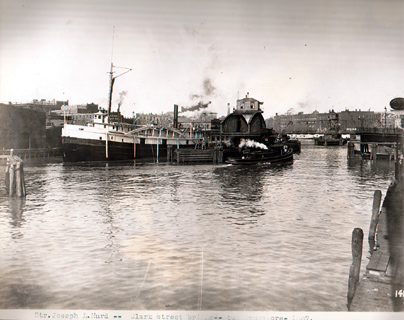 The wooden steam screw passenger and bulk carrier Joseph L. Hurd was built in 1869 at the Campbell, Owen & Company's shipyard in Detroit, Michigan. In 1874 the vessel was valued at $40,000 and rated A2. Her official registry number was 75154.

The Joseph L. Hurd spent her earlier years as a passenger steamer/ package freighter and was later converted to a lumber and freight carrier. Over the years she had a few run ins; including a dock causing extensive damage, a bridge, a few vessels including a schooner in Sturgeon Bay causing minor damage to both vessels; the probable collision with the Magellan which sunk, and she ran into the Cayuga which did sink. Not long after the mishap with the Cayuga, the Leathem Smith Company purchased the Hurd and cut her down to a single deck steamer and used her for carrying stone. In 1907 she was cut down some more and her machinery was removed. She spent the remainder of her life as a barge.

1869: Ran the Detroit and Saginaw route.

August 1871: Grounded in the Detroit River, later released by the tug W.B. Castle.

November 1871: Collided with the Cortland below Belle Island, Detroit River.

November 1877: Collided on Lake Michigan near two Rivers with the schooner Magelland which sank. Never proven.

September 1884: Aground on a reef near Detour, Michigan. Released by the Leviathan. Repaired at the Wolf & Davidson Shipyards in Milwaukee.

June 1888: Released by the tug Hall and the lifesaving crew after grounding in the fog at Frankfort, Michigan.

Winter 1889/1890: Cabins removed to convert the vessel into a freighter.

May 1895: Collided with the steamer Cayuga which sank on Lake Michigan. One crew member died.

December 1897: Received the boiler from the Australasia.

May 1900: Collided with the Jackson Street bridge in Chicago.

February 1903: In the lumber trade from Alpena to Chicago.

May 1907: Converted to a barge to carry stone. Towed by the tug George Nelson.

September 1913: Stranded north west of the Sturgeon Bay Ship canal with a cargo of stone, released and towed to Sturgeon Bay.

September 28, 1913: While tied up to the Leatham and Smith quarry in Sturgeon Bay, partially loaded with stone, the Hurd broke free of the moorings during a storm and was beached. The uneven strain from the partial load of stone caused her hull to break and she wasn't worth salvaging. The Joseph L. Hurd was abandoned in place and still remains there today.
Today

The bottom where the Hurd is located consists of sand & rocks, with low visibility. The vessel lies in 6' to 17' water next to the Mueller. The sides have spread so the beam of the wreck varies from 32'9" to 32'3"; length is 155'. Port side is fairly intact, as is most of the deck near the stern which points toward shore and is partially buried by rocks. Stem post (8'10") is extant and lies at a 60 degree angle from vertical. The hull is distinguished by a metal plate at the bow, another along the top of the exterior, and a metal patch. One framed rectangular hole is in the side; a round metal pipe also pierces the side near the stern. A large metal structure , square at the bottom with a round wheel on top was found near the stern. No sign of the boiler, engine, machinery, etc. Additional findings include a large steel cable running south of the wreck.