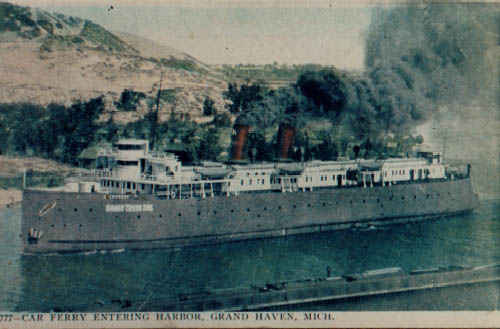 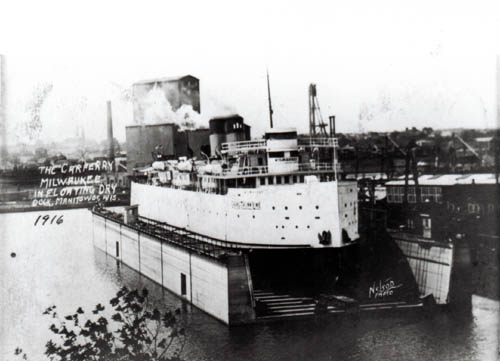 The steam powered, steel hull, rail car ferry Manistique Marquette Northern I was launched at Cleveland, Ohio in December 1902. It had been built by the American Shipbuilding Company and was given the official registry number 93363. The vessel had four tracks and the capacity to carry 30 freight cars. The name was changed to Milwaukee in late 1908 when the vessel was sold to the Grand Trunk Milwaukee Car Ferry Company to be used on the Milwaukee-Grand Haven run carrying boxcars or freight. The Milwaukee's earlier years had reflected a few changes in ownership and management, but the it served the Grand Trunk Company well with only minor accidents. The vessel spent many winters in Grand Haven working through the frozen harbor.
On January 5, 1908 the Milwaukee was damaged by ice off Manistique and upon returning to Manistique harbor it sank at the Chicago Lumber Company dock. A few days later it was raised and repaired at South Chicago.
Final Voyage

October 22,1929. The car ferry Milwaukee left Milwaukee at 3:00 p.m. for the return trip to Grand Haven, heading into a northeaster gale that most other captains thought bordered on irresponsible considering the storm was one of the most tempestuous storms seen on Lake Michigan. The vessel passed the U.S. Lightship No.95 at 3:45 p.m. three miles east of Milwaukee pitching and rolling heavily, and was never seen again. According to the message case, by 8:30 that night, it was taking in water fast and had turned around, heading back towards Milwaukee. By then, the sea gate was bent in and the crews quarters were flooded.
There was little concern for the Milwaukee until it was 36 hours overdue. On the morning of October 24th, the sailors on the steamer Colonel spotted a field of debris near Racine and in the following days bodies, lifeboats and wreckage were found.

Since there were no survivors, it will never be known what exactly happened, but it appears that the vessel had turned so the stern was to the seas and with the sea gate bent in, waves passed onto and below the decks swamping the vessel.

The wreck of the Milwaukee lies in 125 feet of water off of Whitefish Bay approximately six miles north of Milwaukee and three miles off shore. The wreck sits upright on a sand and muck bottom with the superstructure about 100 feet east of the hull. The bow faces southwest and sits upright. The cargo of tubs along with most of the railroad cars (one has three cars in it) are still located on the wreck. Some of the stern box cars are missing and at least one is sideways on the deck. The engines and propellers are still in place.