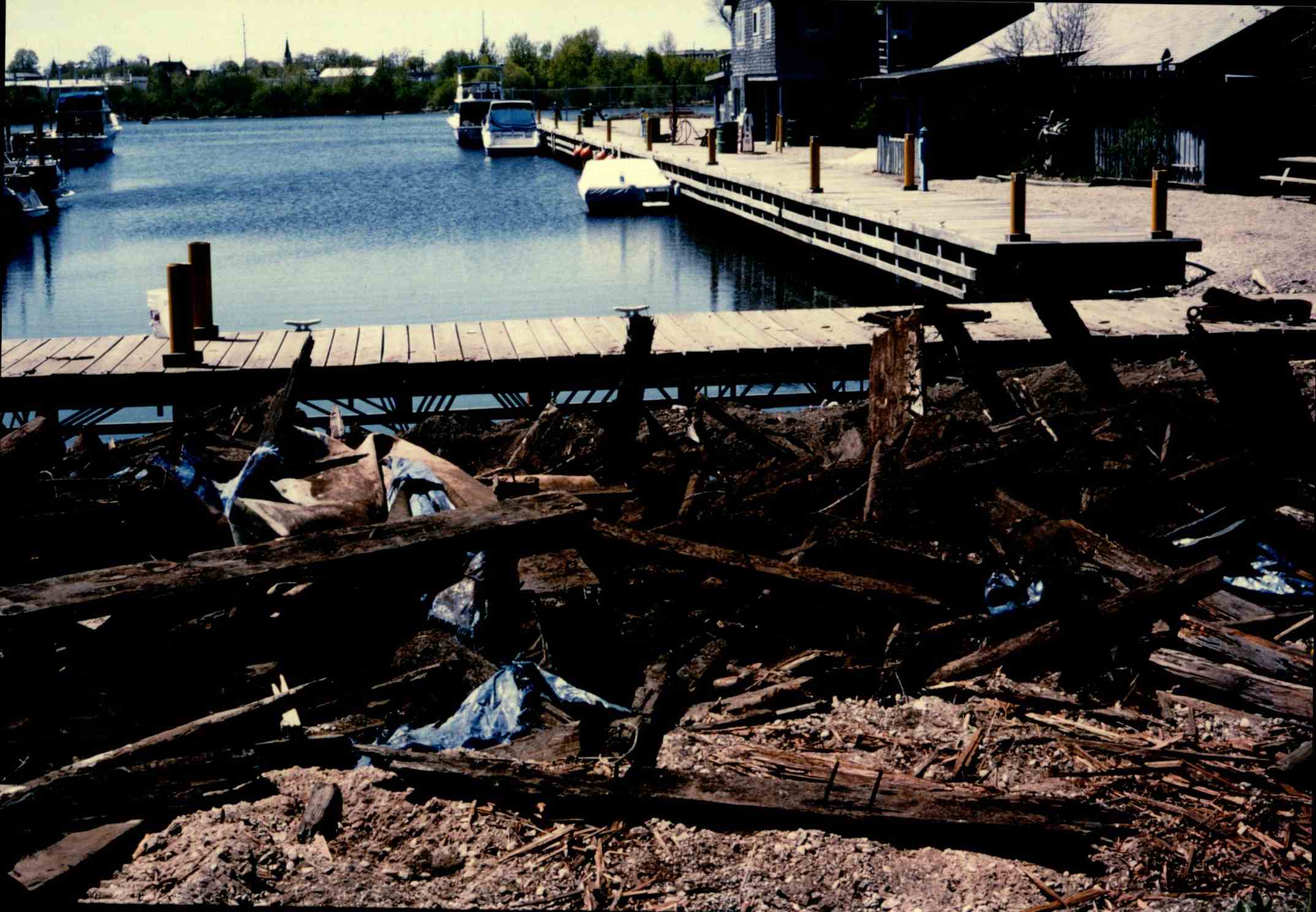 The Alvin Clark was built specifically for the Great Lakes cargo trade. The 220 ton brigantine carried primarily grain, coal, rough sawn lumber and salt. Her cargos were often huge. "One entry from 1852, shows a cargo of 327 tons of coal plus a deck load of lumber. This would make the Clark capable of carrying loads weighing two and a half to three times her own gross weight of 220 tons."
Final Voyage

"Marine Disaster, on Green Bay - We learn from Captain Dingman of the Steamer Sarah Van Eps that the topsail schooner Alvin Clark capsized in a gale about 5 o'clock P.M. Wednesday, 29th off Chambers Island, and her captain, mate and one of her crew were drowned. We do not learn their names. She was owned by Mr. Higgie of Racine, who formerly commanded her, but our informant does not know whether he sails her this season or not. She was on her way to Oconto, light, for a cargo of lumber. The balance of the crew were picked up by a brig, name unknown." Green Bay Advocate, July 7, 1864.

"Capsizing of the Alvin Clark - The Schooner Alvin Clark was capsized on Green Bay, near Chambers Island, in a squall which occurred about a week ago Saturday. Capt. Durnin and the mate, John Dunn, were both drowned. Capt. Durnin leaves a family in Racine. We understand also, that the mate was a married man and that his family live on the north side of the river." Milwaukee Sentinel, July 8, 1864.

"Unsuccessful wrecking expedition - The tug Sarah E. Bryant, which left Buffalo some three weeks since to go to the relief of the schooner Alvin Clark capsized in Green Bay, returned from that locality on Sunday evening as far as this port (Detroit) and proceeded on to Buffalo yesterday morning. The work of raising the Alvin Clark was not accomplished and she lies in 20 fathoms of water. Since her disaster she has been sold to other parties who contemplate getting her up at the earliest possible opportunity." from a Detroit paper name unknown.
Today

A sad chapter in the Great Lakes maritime history came to an end in May of 1994 when the remains of the schooner Alvin Clark were trucked to a landfill. She was mostly intact when discovered by a diver from Egg Harbor, Frank Hoffman while trying to recover fishing nets that had become entangled on her in 110 feet of water. During 1968 and 1969, Hoffman and volunteer divers managed to raise the Clark. She was then moored along the shore of the Menominee River and used as a tourist attraction. Without enough funding to properly conserve the ship, the artifacts and the Clark herself began to deteriorate. After years of financial problems the Clark was sold to a developer who raised the vessel from her mooring and placed her on a bed of pea gravel. But without proper care she became an eyesore beyond feasible restoration, a testament to the need for preplanning when recovering items from the bottoms of the lakes.
Nearby
View 113 more View fewer
^
© 2022 - Wisconsin Sea Grant, Wisconsin Historical Society