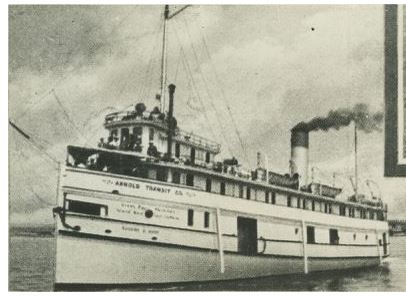 The wooden steamer Eugene C. Hart was built in 1890 as a package freighter by Henry and G.B. Burger in Manitowoc, Wisconsin. Her official registry number was 136131. She served the Hart Shipping Line until 1917 when she was sold and sent to the east coast during World War I. In 1919 she was renamed the Norlond and in the spring of 1922 returned to the Great Lakes working the package freight trade between Chicago and Milwaukee. Over her lifetime she had been owned by at least seven different owners.

August 1901: Broke propeller shaft on the Soo River and towed by the tug Victor to Detour, Michigan.

1917: Sent to the east coast after being purchased by the International Bank of New York.

Spring 1922: Brought back to the Great Lakes after being bought by Frank Finsthwait.
Final Voyage

On Saturday November 13, 1922 the package freighter Norlond left Chicago for Milwaukee, putting in at Racine for shelter during a gale early Sunday. Leaks were discovered and patched so she could continue Monday morning for Milwaukee. Soon after leaving Racine, she re- sprang a leak, and after trying to pump the incoming water for two hours, the Captain and crew took to the two lifeboats. Less than minutes after the second lifeboat was free from the Norlond, the Norlond sank stern first off of Milwaukee's South Point in 58 feet of water with $500,000 in cargo. The captain and crew managed to make it to shore safely.
Today

In the summer of 1923, the wrecking steamer Jane salvaged the engine of the Norlond along with most of the general merchandise that made up the original cargo.

Today, the Norlond sets upright in 58 feet of water on a sand and mud bottom, broken up and scattered about. The upper portion of the hull has fallen apart with the boiler, shaft and propeller, keel exposed. The cargo of general merchandise had been strewn across the bottom.