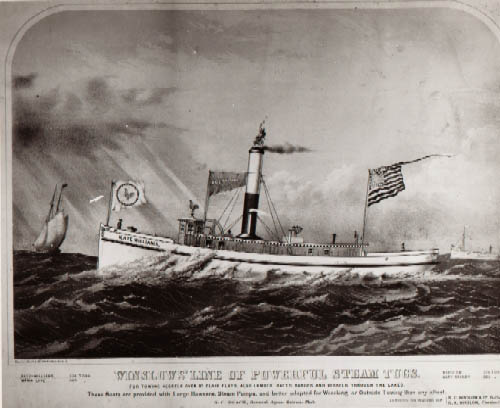 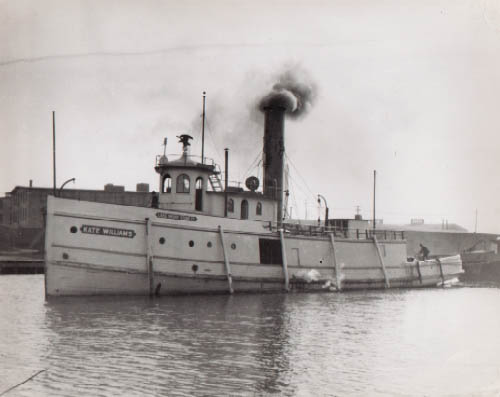 The wooden tug Kate Williams was built at the Ira Lafrinier shipyard in Cleveland, Ohio in 1862. The vessel was powered by a compound steeple steam engine built by Murphy Iron Works, Detroit, Michigan and a single boiler built by the Detroit Locomotive Works. The Kate Williams was a large tug that was used extensively for raft towing. In 1874 the vessel was valued at $9,000 and rated B1. Her official registry number was 14040.

July 1863: Part of the largest tow to Lake Erie with ten loaded vessels.

In late September 1907 the Kate Williams was anchored between Jackson Harbor and Rock Island, Door County, and a bad blow came up from the north, and blew all that night. It was too much for the anchor chain and it parted, letting the Williams drift in between Washington Island and Rock Island. The seas pushed her up quite high on the rocks, and she was soon lying over on her side so far that it wasn't possible to walk on the deck.. The vessel ended up with only seven feet of water under her, she normally would draw twelve feet.

The Leathem and Smith Towing and Wrecking Company was contracted to attempt to refloat the Kate Williams. The tug George Nelson came up from Sturgeon Bay with a barge and all necessary equipment to release and salvage her. After several attempts, they could not release her. This happened in 1909. They gave up any more attempts but they recovered the steam boiler, the engine, propeller and shaft, along with all pumps, etc. that were useful.
Today

Wreck of the Kate Williams is beached, it consists of 24' of keelson from the stempost aft, several timbers and bow deadwood. A portion of the stempost is intact on the forward end of the keelson assembly, measuring 13" molded and 14" sided.
Other portions of this vessel may be at the east end of Jackson Harbor where the ship was originally wrecked.