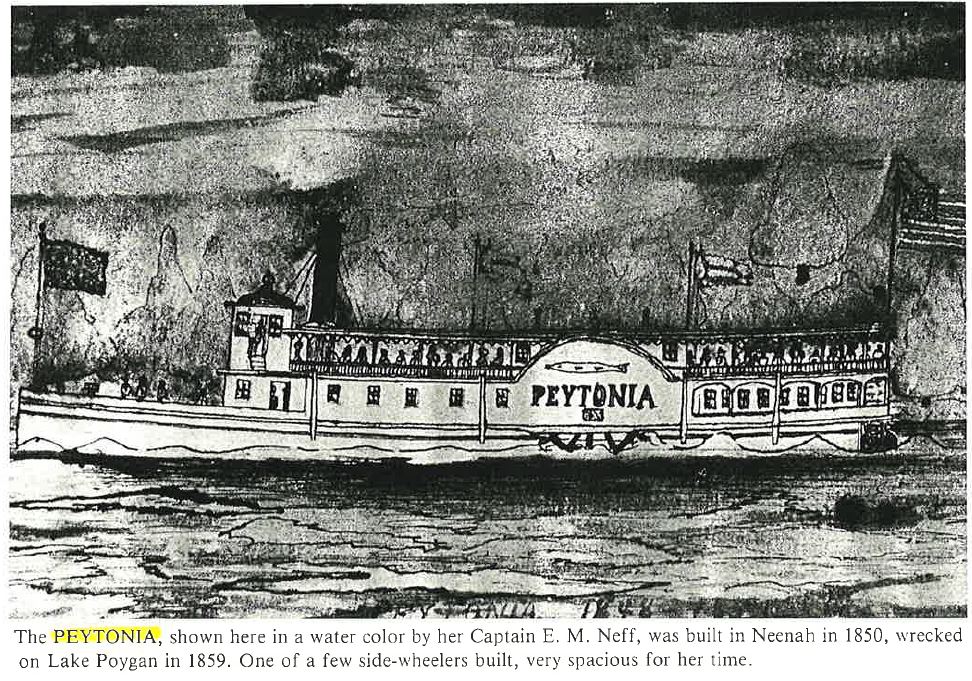 The steamboat Peytonia was the second steamboat on Lake Winnebago and was either built at Neenah in 1849 or rebuilt there. The second version states that she was brought to Green Bay up the river to the rapids at DePere where her hull was cut in two and hauled to Neenah where she was reassembled and added to.
Final Voyage

On March 26, 1859, the sidewheel steamer Peytona, en route from Oshkosh to New London, with eight to ten passengers aboard, was caught in the ice on Lake Poygan and crushed. The Peytona was following the steamer Wolf through the ice on Lake Poygan, headed for the Wolf River, when the wind picked up and drove the ice together, crushing the steamer's hull. The Peytona sank in "less than a minute" leaving her upper works and some machinery on the ice. She was in twelve feet of water. Although her engine and boiler were later recovered, in 1908 Lawson reported that her hull remained where it sunk. Despite the rapid sinking of the Peytona there was no loss of life.

"The crew got safely to the banks, and later the boiler and engine were salvaged." The Trait of the Serpent: The Fox River Valley Lore and Legend. Robert Gard and Elaine Reetz.
Nearby
View 112 more View fewer
^
© 2023 - Wisconsin Sea Grant, Wisconsin Historical Society