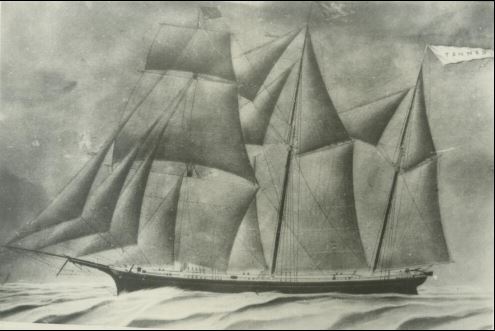 The Tanner was launched on 31 October 1863 by the Milwaukee shipbuilding firm Ellsworth & Davidson; built for Guido Pfister, Gottlieb Bossert, and Frederick Vogel, all tanners from Milwaukee. Also a part owner was her Captain Nicholas Johnson. She was a barkentine measuring 156.38 feet long, 31.75 feet in breadth, and 12.08 feet depth of hold with one deck and three masts

On her maiden voyage to Buffalo with a cargo of wheat, her foremast was carried away along with her mainmast head while off Sheboygan. She was forced to limp to the Manitou Islands where she waited for a tow to Detroit for repairs. Her owners changed in the spring of 1867; Pfister and Bossert sold their shares in the vessel to Nicholas Johnson. At that time her Master was changed to William McFadden. Another incident occurred in May 1869 when her topsail yard was carried away enroute from Milwaukee to Buffalo, but she arrived safely. Her final owners in 1875 at the time of her loss were Nels A. Nelson, Guido Pfister, and the estates of J. Nelson and Nicholas Johnson.
Final Voyage

About 10PM on 9 September 1875, the Tanner departed Milwaukee for Buffalo with a cargo of wheat. Upon leaving the harbor, she was struck by a squall preceding a northeast gale, which stripped the vessel of much of her canvas. The Tanner dropped her anchor in four fathoms of water. The tug F.C. Maxon initially came to her aid but the storm raged and they were unable to secure a towline, which forced them to abandon the rescue attempt. The Tanner was left “off the harbor piers at the entrance to the river east of Railroad Street” (Greenfield Ave.). As the night advanced, the storm increased. About 4 AM on 10 September 1875, the Tanner was carried into the pilings of the piers, which broke her keel just forward of her mizzenmast. The vessel sank to her decks. Her captain, M.D. Howard and her crew of nine took to the rigging where they stayed all night, exposed to the cold temperatures, wind, and rain. At daybreak, the U.S. Revenue Cutter Andrew Johnson sent their small boat commanded by First Lieutenant Barstow to attempt a rescue, but the boat swamped in the heavy seas, losing her oars, life preserves, and lines; her boatswain was carried overboard, but he was recovered. With the failure of the Andrew Johnson’s crew to reach the bark, a local effort was made. Mr. Chris Starke obtained a dump scow from the shipyard of Wolfe & Davidson. It was to be towed behind the tug J.J. Hagerman (Conrad Starke, Master) and brought alongside the Tanner as a breakwater barrier for the lifeboat or yawl from the steamer Amazon. Before the boats could be set in place alongside the wreckage, Captain Howard and the cook jumped and attempted to swim for shore. The Captain drowned soon after leaving the wreck, but the cook, with the assistance of Clement Hackney of the Milwaukee Iron Company, was successfully landed near Bay View. As the tug, the dump scow and yawl drifted down alongside the Tanner the remaining eight crew members dropped into the water one at a time and were picked up by the yawl, which was drawn up to the scow and was in turn, towed to shore where the victims received treatment. All six of the volunteers in the yawl received life-saving medals of the second class by the U.S. Life-Saving Service.

The more interesting part of this story, is the establishment of the Life-Saving Service at Milwaukee because of the Tanner accident. Apparently a station for Milwaukee had been authorized by Congress several years prior to the accident, but funding and progress in building the station was very slow. Because of the Tanner 's loss, an appeal was made for immediate action and in the spring of 1876 a boathouse for the U.S. Life Boat Station was erected at a cost of $5,000 and on 7 May 1876, Station No. 10 opened operation for its first season. The station’s first Keeper was Henry M. Lee, one of the heroes of the Tanner rescue.
Today

On October 10, 2018, Tanner's remains were located via side scan sonar by Jerry Guyer just to the northeast of Jones Island.